Can the all-new BMW X3 rise to the top of the highly-competitive luxury mid-size SUV class? We find out...

The premium mid-size segment has grown 10-fold since BMW first launched the X3 in 2003, but in recent years other rivals’ products have seemed more appealing. Now though the X3 has been comprehensively updated with a new platform, styling and tech and it can rise to the top once again. It’s a serious premium product, and further tests in the UK could prove this is a five-star car.

You can lay most of the blame at the feet of the BMW X3 for the rise in popularity of luxury mid-size SUVs. The German giant has shifted close to 1.5 million of them over two generations since 2003 and wants to dominate the class once and for all.

But for the last couple of years the Bavarian off-roader has looked a little past it with big rival Mercedes launching the excellent GLC, Alfa Romeo and Jaguar introducing their desirable Stelvio and F-Pace, and our current favourite, the Volvo XC60, becoming the new yardstick. So BMW has thrown everything – up to and almost including the kitchen sink – at the development of the new X3 to take it back to the top of the tree it once planted.

While it may not look it, the X3 is totally new; the styling is more evolutionary but arguably more handsome in a class that is dominated by fashion, but it’s more refreshingly new underneath and inside. And because diesels aren’t the exactly flavour on the month, there’s a selection of petrols on offer of the first time, including a hot M40i with a 355bhp 3.0-litre turbocharged six-cylinder motor. 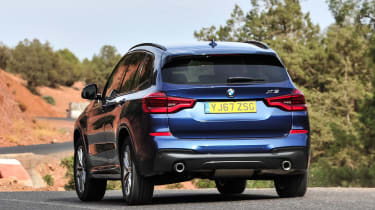 But here we try the not so desperately hot diesel: the predicted top-seller, badged 20d. It’s the usual 187bhp four-cylinder diesel that’s used in a variety of BMWs and as such, it’s roughly on par with its rivals in terms of performance, emissions and fuel economy. It’s a decent enough engine - smooth enough when paired with an eight-speed automatic gearbox - but you’d never call it the last word in refinement.

In the X3, though, the auto is the only gearbox offered, and the 20d has enough potential for surprisingly quick and unflustered performance. However, unlike in most BMWs, the engine’s refinement levels are impressive; it’s only under hard acceleration where the typical four-pot diesel clatter really interrupts the peace and quiet, and at a cruise it’s eerily quiet.

That goes for the rest of the package. One area where BMW has really improved the X3 is in the refinement department; there’s a finesse to the way it drives, the interior ambience and the quality of the interior that is easily a match for the Audi Q5 and the Volvo XC60. BMW now throws in leather seats with a softer grain, for instance, and the fit and finish is exemplary. It’s only the plastics on the lower half of the doors that are the anomaly – but even then, they’re no worse than you’ll find on a GLC or F-Pace. 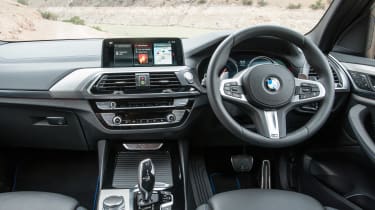 Speaking of the F-Pace, it’s here where there’s a minor chink in the BMW’s impressive spread of abilities. While the 2.0-litre diesel is hardly the most thrilling X3 BMW offers, like its rivals, the entry-level diesel still needs to excite a little. For the most part, it does; the body control is excellent and the chassis is always keen to turn into a corner, but the steering isn’t the finest. Around town there’s an odd elasticity to it – but pick up speed and it weights up nicely and is more than accurate enough. All told, though, its set-up doesn’t have the same crispness as the Jaguar’s.

We’ve only tried the X3 with the optional variable damper control (£750) and there is quite a marked difference between comfort and sport modes. We’ll have to wait to see whether it’s worth the money on UK roads, but our suspicion is that it’s not.

Not only does the X3 use the same platform as the 5 and 7 Series saloons, but it also pinches some of those cars’ technology. Delve into the options list and you’ll find digital dials, a 3D head-up display, BMW’s Active Key, and ventilated seats. Away from the options list, standard kit is pretty generous; SE models get LED headlights, leather seats, heated front seats, 18-inch alloys, three-zone air conditioning and ambient lighting with six colours. Our xLine car adds sports front seats, 19-inch wheels and some extra body styling for a classier look. As ever, M Sport will be the pick for most with its racier styling, M badges and lowered suspension.

The X3 is spacious but no more so than its rivals. Six-footers in the back can sit behind a similarly sized driver and front passenger with just a small amount of space to spare, while boot volume (at 550 to 1,600 litres) is about the norm for the class.