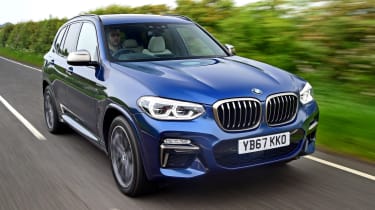 The new BMW X3 M40i is a fitting range flagship. It’s got more character than an Audi SQ5, and while it’s not as sharp as a Porsche Macan its breadth of abilities is strong. Yes, it’s expensive compared to the accomplished diesels, but on a monthly finance deal, the difference could be less than you might imagine.

The proliferation of monthly finance deals means the way we buy cars has changed. People are pushing their budgets to new heights, and the gap between a bog-standard entry model and a well-equipped range-topper is smaller than ever before.

As such, models like this new BMW X3 M40i are becoming seemingly more attractive to the average punter. For just a little extra per month, you can ditch your entry-level 2.0-litre diesel for a Porsche-baiting six-cylinder super-SUV.

It was this very car that gave us our first taste of the all-new X3 in Portugal late last year. But while we’ve driven diesel versions in the UK since, we’ve had to wait to try the fire-breathing flagship on British roads. 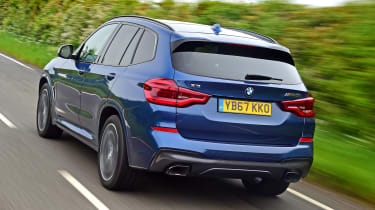 At more than £50,000, this X3 M40i is aimed squarely at Audi’s latest petrol-powered SQ5. Each boasts around 350bhp and 500Nm of torque, and both use an eight-speed automatic gearbox with four-wheel drive.

There’s nothing to separate the pair when it comes to running costs, either. Both return roughly 34mpg, and each emits between 188 and 189g/km of CO2. Coincidence? Perahps not.

But the way these two cars drive is a little different. Whereby the Audi feels fast, yet calm and grown-up, the BMW is a more playful and shoutier affair.

It immediately feels more urgent. Despite having near enough identical power outputs (355bhp in the X3 vs the SQ5’s 349bhp), the BMW does 0-62mph six-tenths quicker. It feels faster, pinning you to your seat under full throttle. 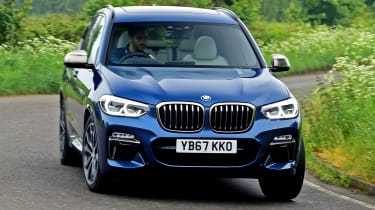 The meaty straight-six has bags more character, too. It’s smooth and refined at a cruise, but flick the X3 into Sport mode and it’ll pop and crackle like a hot hatch. It adds a welcome degree of drama to what is a largely unassuming SUV.

The M40i even manages to disguise its bulk pretty well in the bends. It’s certainly sharper than rival SUVs like the not-so-sporty Volvo XC60; the nose is precise, tucking in nicely through fast corners. Body roll is kept largely in check, although swift changes of direction can upset the flow. The steering offers decent weight, and more feel than you’d expect from a car of this type.

Our car sat on BMW’s Adaptive M Sport Suspension, and rode well over a variety of surfaces. We weren’t able to try a car on passive dampers, but for £530, we think its an option box worth ticking. 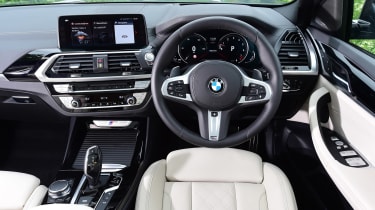 Inside, the X3 sets a high bar for fit and finish. Everything feels beautifully built, and the logical iDrive system is feature-packed and easy to use. It’s a shame BMW doesn’t offer Android Auto, however, and that Apple CarPlay is a £235 option. Still, sat-nav is standard, and the firm’s real-time traffic info is among the most accurate of any maker.

Despite our reservations with regards to mobile connectivity, the range-topping X3 does come well equipped. The lovely 20-inch wheels are standard, as are the electrically-operated, heated leather seats. The digital dials look great, too, while the subtle M badging constantly reminds you this isn’t a hum-drum diesel family car.

That said, there’s plenty of room for the family thanks to the roomy cabin and big boot. Just make sure you avoid our car’s Ivory White leather if you’ve got kids with mucky shoes and sticky fingers...