We get behind the wheel of the new BMW X3 plug-in hybrid, which boasts a pure electric range of 31 miles 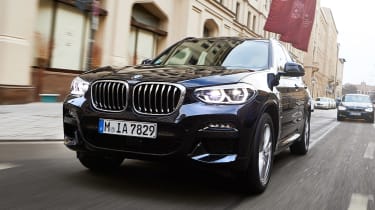 Our short drive in an early pre-production version of the upcoming BMW X3 plug-in, proves it should be more than capable of leading the model’s electrified push when it arrives later this year. It does feel like something of a stop-gap between the excellent diesel models and the forthcoming iX3 EV, but it’ll no doubt appeal to SUV buyers currently unable to commit to an electric car. It looks and drives like an X3, and that’s no bad thing at all.

BMW’s current X3 will be offered as a pure electric vehicle before too long, but until it does, the German brand will look to fill the gap with this: a plug-in hybrid version of its popular mid-size SUV.

Badged the X3 xDrive30e, it uses a similar hybrid set-up to the forthcoming BMW 330e saloon. Using the firm’s very latest plug-in technology, the X3 boasts a 2.0-litre four-cylinder petrol engine mated to a powerful electric motor – developing a combined 249bhp. Like in the 330e, an extra 41bhp (for a total of 289bhp) can be made available in short bursts.

Due to the X3’s bulkier body and heavier kerbweight, it trails the 330e for efficiency and electric range. The BMW X3 xDrive30e claims CO2 emissions of 56g/km and a battery range of 31 miles; 17g/km and eight miles shy of the plug-in 3 Series. 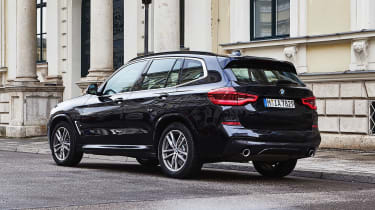 Of course, the X3’s xDrive all-wheel drive system offers superior traction, which proved particularly useful during our test drive of an early pre-production model in Germany last month. With snow on the ground, it showed similar poise to the conventional X3 xDrive20d, displaying excellent grip in slippery conditions.

In fact, you’d be hard pushed to notice the extra weight in normal driving. The standard X3 is among the sharpest cars in its class to drive, and the plug-in version remains pretty agile for a car of this size. In fact, it arguably feels less like a hybrid than its 3 Series sibling – and more like a straight petrol car.

That may be because it inevitably spends less of its time in pure electric mode, but even as it transitions between battery power and petrol propulsion, the system pushes on quietly. There’s little in the way of knocks, vibrations or judders, as the two combine seamlessly in the car’s standard settings. The petrol-electric is impressively refined even at steady motorway speeds.

As the X3 xDrive30e is based on an existing car, unlike the all-new 3 Series, it uses the older drive mode set-up from the 530e. As such, you’ll find the familiar Max eDrive (EV) and Battery Control (which can hold the car’s charge) settings, as well as an Auto eDrive button, which mixes the two just as the computers see fit.

Acceleration is swift, if a little shy of the latest electric cars. But the added shove from the motor gives it near-diesel-rivalling levels of torque. The four-cylinder petrol engine isn’t as tuneful as the six-cylinder unit in the latest 7 Series hybrid, but it fits the bill in what is set to be a substantially cheaper and less luxury-focused model.

Yet while it can compromise on rear seat space and the level of luxury leather, the X3 plug-in needs to succeed in its role as a family car. Space in the back is unchanged, while the 450-litre boot is 100 litres smaller than you’ll find in a straight petrol or diesel version of the same car. The load bay is still a decent shape, however, and the seats fold just as they do in the standard model.