Specification changes and a 10.2" touchscreen up the Land Rover Discovery Sport's game for 2017. We test the TD4 diesel... 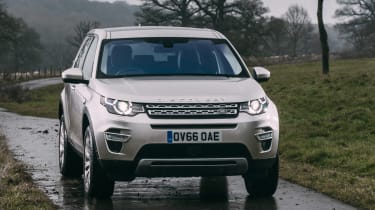 A series of light updates allow the Discovery Sport to stay at the top of its game in a competitive and fiercely fought class. The new infotainment system is intuitive to use and looks great, while the suite of safety features should appeal to those with a growing family.

Just like it did with the Range Rover Evoque, Land Rover has applied a host of updates to its Discovery Sport just in time for 2017. Altogether more subtle than those given to its Range Rover sibling, the changes focus around the same 10.2-inch infotainment display.

It’s a welcome revision, with the same swipe and pinch-to-zoom functionality for the menus and nav screen. It’s designed to replicate the setup you’ll find on the latest smartphones – and works really well. It’s a £1,140 option on all but the entry-level SE and SE Tech model and worth the extra over the basic system.

The Disco Sport is also the first Land Rover to use the brand’s Tile technology, which uses small Bluetooth tags that you attach to everyday items like keys and wallets. The system then detects whether all the items are in the car, and alerts the driver if anything is amiss. It’s a bit of a gimmick really, and few owners will make good use of it. 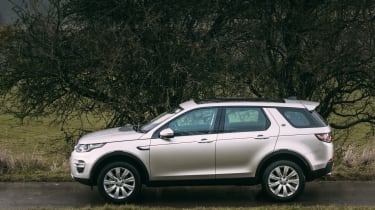 Elsewhere, the Discovery Sport gets a host of new safety features for 2017, including a drowsiness detection system, intelligent speed limiter, and a camera-based lane departure warning system.

Land Rover has also added a few exterior design packs, although these were not fitted to our test car. In a similar vein to the Ember additions for the Evoque, a Graphite Pack boasts dark details, badges and side vents, as well as a grey contrast roof and black door mirrors.

No changes have been made to the way the car drives, meaning it remains one of our favourite seven-seat SUVs. It’s powerful, refined and composed at high speed. The low speed ride leaves a little to be desired, but the steering is direct and, despite its size, the Sport isn’t too affected by body roll. 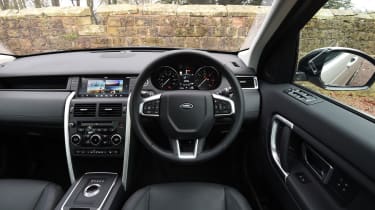 As with all Land Rover products, the baby Discovery pulls clear of rivals off-road, too, with its complex Terrain Response settings helping the driver in adverse conditions. It’s so simple to navigate through rutted tracks, and the standard-fit hill descent control lowers the car down seemingly impossible slopes with ease.

Our HSE Luxury model sits beneath the flagship HSE Dynamic Lux but comes loaded with kit. Heated and cooled leather seats, xenon lights and dual-zone climate control all feature, along with various parking aids and that new 10.2-inch screen. If you don’t want or need the updated infotainment system, it’s worth considering one of the cheaper SE or SE Tech models, though, as even these feature kit like cruise control, a heated windscreen and Bluetooth connectivity.