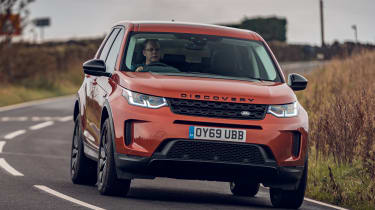 It may look similar to the previous model, but the updated Land Rover Discovery Sport hides a wealth of improvements under the skin. Refinement in particular has greatly improved, while the SUV still delivers both seven-seat practicality and staggering off road ability that no rival can compete with. Despite the addition of mild hybrid tech, the engine and gearbox options can’t quite compete with some rivals. Otherwise, Land Rover is on to a winner here.

There’s little to indicate how deep these changes run from the outside. The overall look has gently evolved - new lights, revised bumpers, but similar proportions overall. All but the keenest eyed observers will need an old and new one parked side-by-side to spot the difference.

But then there’s not much need to fiddle with the design. Land Rover shifted 120,000 Discovery Sports worldwide last year, about a quarter of which found homes in the UK. That means, here at least, it sold more than rivals like the BMW X3 and Mercedes GLC. Instead, Land Rover has focussed on improving the tech - both digital and mechanical.

So while the interior design looks familiar, there’s a much improved infotainment screen (both Apple CarPlay and Android Auto are standard, too), and high-end trims get a customisable 12.3-inch driver’s display. It takes the place of the now standard - and slightly odd looking - part analogue/part digital layout.

Unlike other recent JLR products, the Discovery Sport doesn’t get a third screen for heating and ventilation settings. However, it does get a pair of physical multifunction dials, which work really well. Both adjust the heating in their standard setting, while a push of separate buttons lets the dial closest to the passenger tweak fan speed and the driver’s side one switch between the various driving and off-road modes. Press either dial into the dash, and they can adjust the seat heating and cooling, too. 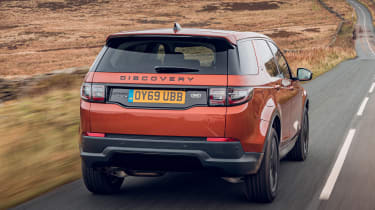 The rest of the cabin is much the same as before. That means that head and legroom are pretty decent, and there’s a third row of seats in the boot. Boot space is an impressive 754 litres in five seat mode, while this drops to 157 litres when all seven seats are in use. Land Rover reckons that cubby spaces are now more abundant - not that this was ever a weak point before.

And it’s got stronger in other areas too. Literally, in the case of the chassis: the updated metalwork is 10 percent more rigid than the previous Disco Sport, which combined with new mounting points for the engine and suspension subframe, means that refinement has significantly improved. It’s really noticeable out on the road: road and suspension noise, or lack thereof, are very impressive by class standards.

The suspension setup is more forgiving than that of a BMW X3; it leans more through the corners, but it’s a little more comfortable. It’s more fun to drive than the Volvo XC60 though, which is softer - and more rolly - still.

The Discovery Sport comes with a choice of three diesel and two petrol engines. All but the basic D150 - a 2.0-litre diesel with front-wheel drive and a manual gearbox - come with mild hybrid tech. The system recovers energy when the car slows down, and redeploys it under acceleration to reduce load on the combustion engine. This, combined with a stop/start system that can cut in when coasting below about 11mph, helps to improve fuel efficiency by seven percent, says Land Rover.

The middling D180 diesel is expected to be the most popular model, but it’s not without its problems. Like the Discovery Sport’s other noises, engine drone is better isolated from the cabin than in several German rivals, but in performance terms the Land Rover doesn’t feel as punchy as 178bhp and 430Nm of torque suggests. It’s no better for the P200 petrol either, which needs working hard to make decent progress, even with just a driver on board.

It’s not helped by the eight speed automatic gearbox which, though smooth-shifting for the most part, is nowhere near as responsive as the nine-speed unit fitted to the equivalent Mercedes GLC. This can be mitigated slightly by the punchier 240 diesel though, which gains 60bhp and, more handily, an extra 70Nm. 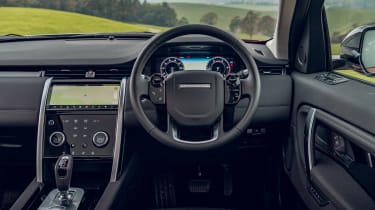 And that torquey diesel will definitely be the one to choose if you want to do any towing - an area where the Discovery Sport gains some more clever tech. The Trailer Assist system allows the driver to control the car’s steering through one of the dials on the dashboard, making it much easier to move things exactly where you want them.

Predictably, this car being a Land Rover means that it’s several orders of magnitude better off road than any of its rivals, or indeed better than most buyers will ever need it to be. Huge wheel articulation and a 600mm wading depth are backed up by a 360 degree camera and Land Rover’s new ClearSight Ground View system.

The latter piece of tech is really clever. This uses a mix of three forward facing cameras to create a real-time image of what’s going on directly ahead of and beneath the car. Great off road, but it’s also a boon for parking - there really is no excuse for scuffing those alloys (which now measure up to 21 inches in diameter).

Prices for the new Discovery Sport start from £31,575 for the manual D150. That engine jumps to £36,425 once all-wheel drive and an auto gearbox are added. In total, there are seven trim levels to choose from: there’s S, SE and HSE models, with sporty R-Dynamic variants of each, plus a standard trim at the base of the range.

Our choice, the D240, ranges from the £42,475 ‘S’ to £49,675 for the top spec R-Dynamic HSE model. For similar money, it’s possible to get a BMW X3 xDrive30d: a car that has more power from a six-cylinder diesel engine, but lacks the seven-seats and mild hybrid tech of the Land Rover.