Final report: we say a fitting farewell to our 2017 Car of the Year by getting it filthy off road 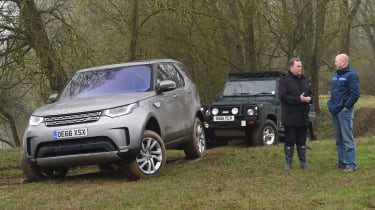 Our 2017 Car of the Year has proven its worth over 15,000 miles of hard use. It’s a brilliant SUV – comfortable, refined and great to drive. But it’s simply crying out for better infotainment.

As time drew to a close with our Land Rover Discovery it seemed appropriate to get it dirty. So I enlisted the help of colleague Patrick Cruywagen, editor of our sister title Land Rover Monthly, and Richard Arrowsmith, who let us loose on his fabulous Billing off-road track in Northamptonshire.

What Patrick doesn’t know about Land Rovers and off-roading hasn’t been written, so his view was worth getting. “The new Discovery is without a doubt the most capable Land Rover currently on sale,” he told me. “You could drive it off the dealership floor and then carry on to Cape Town. Off-roading has never been simpler.” High praise indeed, and another reason why the Discovery is our reigning Car of the Year.

I put my car up against Patrick’s 1998 Defender 110 with its straight-six BMW petrol engine, but while he was having to manually select low range or lock the centre diff, all I had to do was choose the right setting in the Terrain Response system and let the car do the work. 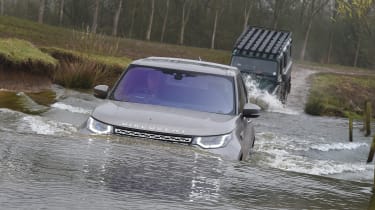 Even through Billing’s swollen lake, the wade sensors showed me how close to the maximum wading depth my car was, and automatically upped the air suspension just a little bit more to be safe. And the ease with which it tackled steep, wet and slippery slopes on the standard Pirelli Scorpion tyres made me pinch myself when I looked around and remembered I was in one of the plushest interiors on the market.

It’s an interior I spent plenty of time in, covering around 15,000 miles in just eight months. The Discovery is an incredible motorway cruiser – quiet and comfortable – while it’s just as relaxing on my sometimes tiresome commute.

Its ability to shrug off some of the worst potholes and deepest puddles I’ve ever seen near my Buckinghamshire home also came in handy during the horrible winter. But when it’s cleaned up and the sun is shining, it looks great and, yes, I’ve even managed to grow to quite like that offset rear plate – although I’m definitely in the minority in the office.

As for the rest of the Fowler family, they loved the car. With loads of space for the five of us plus Leia the Labrador (who appreciated the ability to lower the suspension to make it easier for her to jump in and out), it was great for long journeys and running errands.

Even seats six and seven got regular outings without the usual moaning from my six-foot-two-inch sons about sitting in the back. I think they liked the excuse to see the rear seats being raised and lowered from the dash or from the Land Rover app on my phone. 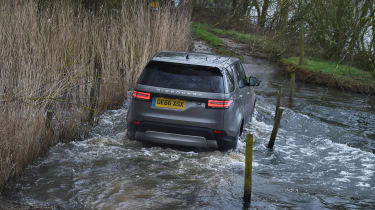 In its time with us, 32.6mpg wasn’t too bad, and mechanically, the car didn’t miss a beat. The only cost I incurred other than fuel was a £29 AdBlue top-up.

But for all the brilliance that netted the Discovery our ultimate Award in 2017, there is one area that proved so frustrating it lost the car half a star – the infotainment.

When the system works, it’s outdated and slow to respond. But mine was riddled with issues that Land Rover just couldn’t fix – whether it’s the inability to connect to my iPhone through the USB to make the most of the excellent Meridian sound system, or the screen taking the best part of a minute to boot up in the morning (meaning I had to do without a reversing camera when backing out of my driveway).

Thankfully, spending some time in a newer Discovery showed that the system can work properly, but it still lags behind rival cars’ set-ups. It wouldn’t prevent us from recommending the Discovery, though. The breadth of the car’s talents are so great in all other respects that I love it anyway. 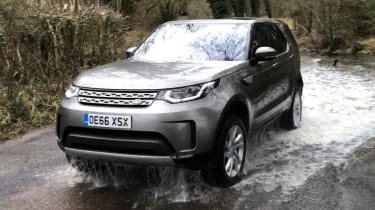 Winter dragged on a little too long this year, but I will admit to having a slightly smug feeling with a Discovery on my driveway.

The SUV’s real go-anywhere ability has come in handy as the amount of rain has left some of my local roads impassable to many cars. But not mine. I can raise the air suspension if needed, but one big benefit of the Disco’s normal ground clearance is its ability to glide through water that leaves other cars (and some SUVs) turning around and finding an alternative route.

It’s the same with the countless potholes that are making so many of the roads on our network seem more like off-road tracks. Some of the ruts are so deep I’m glad the Discovery has hardy Pirelli Scorpion tyres fitted. 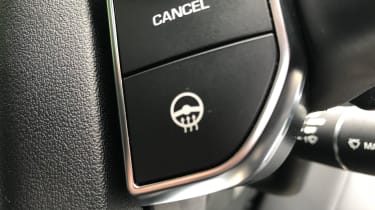 There’s more to my car’s winter worthiness than its wading ability, though. I’ll admit to thinking that a heated steering wheel was a gimmick before this winter – but not now. Within seconds of prodding the button on the steering wheel, the rim is warm and toasty.

Heated seats have been a real boon, too, with those in the back – even in the third row – getting the option of a little heat where it helps most. Up front, though, things can get a little too hot at times, even on the lowest setting.

Sadly my much-mentioned infotainment woes continue. There are times when it takes the best part of a minute for the system to kick into action after starting the car, by which time I’ve had to back out of my driveway with no help from the reversing camera.

The system also now steadfastly refuses to connect to the music on my iPhone through the USB connector – I have to use the lower-quality Bluetooth link instead. 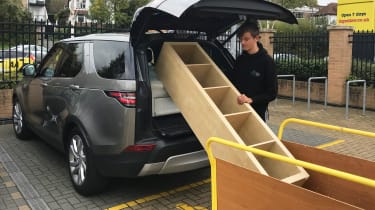 There are times when only a Discovery will do and being without it can be a real inconvenience. I’ve spent rather too much time moving furniture recently and been amazed at how much I can squeeze into the back of my car. Short of a van, there’s not much else that can fit a large shelving unit and bed base in one go; it’s no surprise that Land Rover has just launched a Commercial version of the Disco.

It’s not just about the space, though; it’s how easy it is to use it. Buttons in the boot control everything from the electrically powered rear seats going up and down (all controllable via the Land Rover app on my phone, too) to lowering the air suspension slightly to make loading easier. So big loads can slide in easily, especially with the passenger seat set forward. 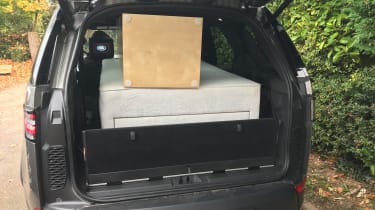 Although my car would be described as an SUV, perhaps the less popular MPV acronym would be better. If we ever need to go out as a five-plus-one, the Discovery’s extra seats are a massive bonus. They’re not so small that the fully-grown younger members of the Fowler family can’t clamber in, either.

While I’m enjoying all that, plus its comfort and refinement, there’s one big blot on the car’s copybook. The infotainment set-up continues to frustrate, in spite of dealer software updates. It takes too long to warm up and turn on the reversing camera, takes just as long to add addresses, the screen goes blank frequently, inputs can take more than one stab of the finger and recently the volume knob failed to work. It’s hugely annoying. 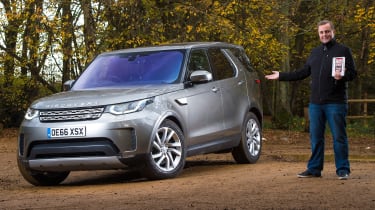 The Land Rover Discovery is our reigning Car of the Year, but what’s it like to run day in, day out?

The new Land Rover Discovery impressed us so much on test that we gave it the ultimate accolade – our 2017 Car of the Year Award. Now it’s time to put it through an even bigger challenge – everyday life with my family.

So is the Discovery living up to its billing as Car of the Year? Well, mostly. We’d be lying if we said the car had been trouble-free (more of that in a bit), but by and large the abilities that impressed us first time out still hold true. 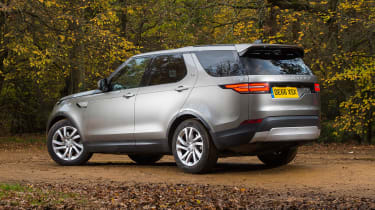 It’s a big car – fine for me, with my need to carry five adults and a dog regularly. And seats six and seven that rise majestically out of the boot at the touch of a button are put to good use to avoid the need for two cars when friends or family are around.

It’s also a heavy car; when I visited our sister title evo recently, I slipped it on to its scales and it registered a whopping 2,517kg (without me inside), which may explain the average economy of 32mpg. That’s not too far from the claimed average of 39.2mpg, but given the 8,600 miles I’ve covered in a little over three months have been mostly on the motorway, I’d hoped for a little better.

However, the number of miles my car has racked up in such a short space of time is an indication of what a pleasure it is to drive and be in.

It rides well on pretty much every surface, while it’s also eerily quiet, especially at 70mph. And thanks to the elevated driving position, you get a good view of corners, so it’s easier to drive around town than you might expect. 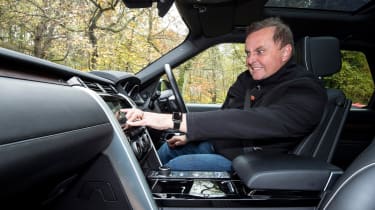 Part of the Discovery’s appeal has always been the thoughtful touches that make it so easy to live with – and this latest model is no different. I’m always impressed by how the driving position is spot on – including armrests in just the right places – and there are numerous handy cubbies and a fridge in between the front seats (although it would be handy if it could have reminded me that my daughter had put a salad in there and forgotten about it).

In seven-seat form the Disco has 258 litres of luggage space. This rises to 1,137 litres with the rearmost seats folded down, so it’s one of the most practical cars on our test fleet. The boot opening is huge, too, which means we’ve been impressed so far with the Land Rover’s real-world practicality.

I’m not a fan of the fold-down section in the boot that just seems to get in the way (a pointless nod to the split tailgate in the old model), but the bigger problem is that the powered boot door is temperamental. We’ve also had issues with the infotainment system that decides to power itself down on occasion. It’s not the greatest set-up in the world anyway, with dated graphics and tediously slow reactions to inputs. But when it decides to say goodbye to a Bluetooth connection mid-phone call, it’s had me shouting at it. And in spite of trying two different SIM cards, I haven’t yet get the Discovery’s connected services to work, either. 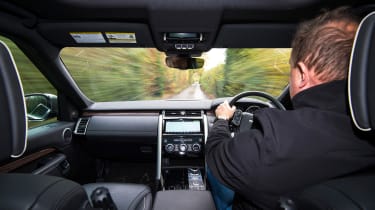 The car’s been into a dealer once for an AdBlue top-up to the exhaust system (at £29), but staff failed to improve the infotainment or cancel the erroneous service light that was showing. So another trip back to the garage will be required soon.

It’s a shame that we’ve already had problems with the Discovery, but its wide range of talents does continue to impress anyone who drives it. Whether it’s heading to the local dump or off on a long-distance road trip, the Land Rover is proving a big hit with us so far.