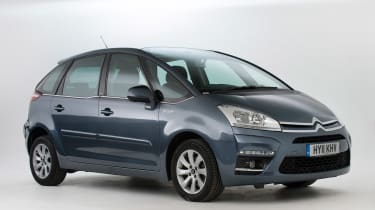 While some recent Citroens have been rather forgettable, the brand has some cracking models in its range. The original C4 Picasso and Grand C4 Picasso are proof of this, with stylish design on the outside and some truly innovative features inside. Yet it’s clear Citroen still had work to do when this Mk1 version was developed, as reliability has been shaky. It’s undoubtedly comfortable, practical, versatile and great value, but before you buy a C4 Picasso, you need to make sure everything works and that there’s no damage from doing what the car was designed to do: carry families.

There is a fine selection of people carriers on sale right now, but if your budget doesn’t stretch to a new model, Citroen’s original five-seater C4 Picasso, and the seven-seat Grand model, are great choices. They’re good to drive, easy to use, practical, well equipped and genuinely innovative, and proved a big hit when new. Plus, they picked up the coveted Auto Express MPV of the Year award back in 2007.

Despite their all-round usability, the C4 Picasso and Grand C4 Picasso suffer heavy depreciation – like most Citroens – so you can now buy one for under £3,000. This is spectacular value.

The Citroen Grand C4 Picasso was the first to arrive in early 2007 and it was shortly followed by the smaller C4 Picasso two months later. A newer-second generation model appeared in 2013, however we’re focusing on the original Mk1s in this review. 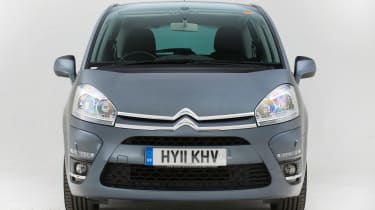 The seven-seat Grand C4 Picasso made its debut in January 2007, before the five-seat C4 Picasso arrived two months later with the same engine and trim options. That meant a choice of 1.8 or 2.0-litre petrol engines and 1.6 or 2.0 HDi diesels, plus manual or EGS semi-auto boxes; from August 2008, Citroen also offered a 1.6 petrol option in normally aspirated (VTi) and turbo (THP) forms.

The high-spec Lounge special edition – based on the 2.0 HDi Exclusive – arrived in January 2008, with the EGS automatic box and five seats only. A facelift in October 2010 brought a tweaked nose and tailgate, more kit and a revised line-up, plus LED daytime running lights on VTR+ and Exclusive models. An all-new car was launched in 2013.

Most C4 Picassos have a 1.6 HDi engine, and this is all you need. However, we’d avoid the EGS automatic gearbox, as it’s less reliable than the manual alternative.

The EGS box is also an acquired taste, but the manual gearshift isn’t all that pleasant, either. The 2.0-litre petrol engine came only with the EGS auto. Go for a revised car from late 2010 if you can (from £6,000), as these are better built and come with more kit. 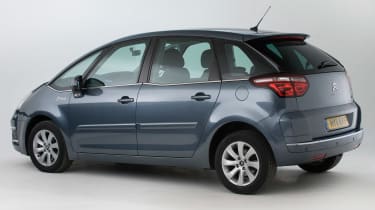 The original version of Ford’s S-MAX was crowned European Car of the Year in 2007 for its blend of style, driving fun and practicality. And while it can be a bit tight for seven, it has lots of kit and a decent reliability record.

The Toyota Verso is also dependable and practical, yet more expensive, while the Vauxhall Zafira is great value and versatile. If you want a five-seat compact MPV, take a look at the Renault Scenic; a seven-seat Grand Scenic is available, too. Both are good value and well packaged, but not always as reliable as key rivals. We’d also recommend the Mazda 5; in Mk1 form, it wasn’t always as dependable as you’d expect, but the Mk2 (from 2010) is better.

The handle for the tailgate is made of plastic and tends to break through fatigue. Once that happens, the switch that opens the boot follows. 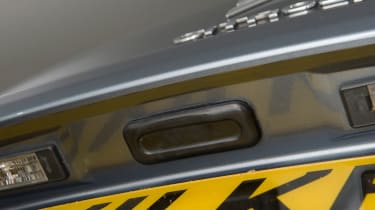 As you’d expect, a radio is standard on all models, but the reception can be very poor. Dealers don’t have a fix yet, so don’t expect a quick resolution.

Most of the Citroen’s electrical functions are activated via a computer, which can go on the blink. As a result, items such as the fuel filler flap opener stop working.

The windscreen washer reservoir is way too small, and you can empty it on a single long journey if the weather is filthy. Be prepared to carry some water. 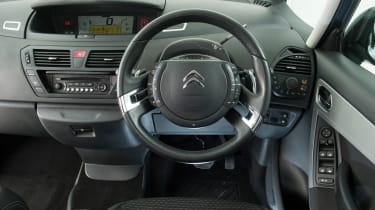 The hi-tech dash looks unusual, if a little unappealing, but the seats are widely adjustable and visibility is great due to the panoramic screen. Boot space is good, at 500 litres, or 1,734 litres with the seats down. The Grand C4 Picasso offers 208, 576 and 1,951 litres in seven, five and two-seat mode respectively.

All C4 Picassos need attention every 20,000 miles or two years, apart from the 1.6 HDi, which cuts this to every 12,500 miles. Services alternate between minor and major, priced at £140 and £250 respectively, although cars over three years old are eligible for discounted servicing – costing £115 and £195. 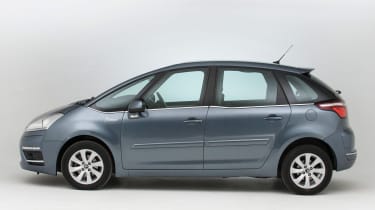 The C4 Picasso has had 10 recalls. The first came in July 2008 due to the possibility of brake servo failure. More cars went in a month later, as the glass roof could detach. Braking issues led to a recall in September 2008, while another three months later was due to electrical glitches.

The first-generation C4 Picasso didn’t make it into our Driver Power 2015 satisfaction survey. It hasn’t featured in Driver Power since 2012, when it finished 61st, and scored fourth for practicality but 87th for reliability. The Mk2 car managed just 96th place in 2016, three years after its arrival.