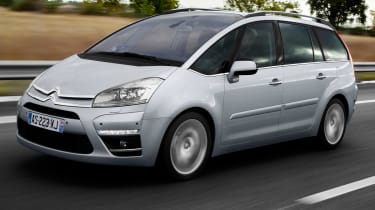 The Citroen C4 Grand Picasso is the seven-seat version of Citroen’s compact MPV. It has the same wheelbase as the standard C4 Picasso, but is 128mm longer to make room for the third row of seats and increase boot space, too. And what space. There’s a maximum of 1,951 litres available, all of the seats fold completely flat, and there’s a flat boot lip that makes loading heavy items easy. If you’re going to use the Grand Picasso as intended and load it to the max, then you need a diesel. The 1.6-litre HDi has plenty of power, but we’d recommend the manual over the EGS semi-auto: it’s slow to change and jerky, which makes the C4 Grand Picasso tiresome to drive.

The C4 Grand Picasso is designed with comfort in mind, and is at its best when cruising at speed. The suspension absorbs bumps easily, but body control is poor, and passengers can feel as if they’re bobbing up and down as the suspension settles. There are three 1.6-litre engines offered, the standard petrol, a turbo version and a diesel. The 1.6 THP turbo petrol is powerful and is a good choice if you plan on doing low miles, but the 1.6-litre diesel is best if you plan to carry a full load on most journeys. We highly recommend the manual over the EGS semi-auto – it’s rather jerky in auto mode, and can become tiresome to use.

You only get small engines in the C4 Grand Picasso, so running costs won’t be too expensive. Emissions are competitive at 135g/km for the 1.6 HDi, and fuel economy is 53.3mpg – the EGS auto is 1mpg better than that. The C4 Grand Picasso carries a £1,700 price premium over the five-seater, but it’s worth the extra for the extra seats and boot space you get.

The seven-seat Citroen C4 Grand Picasso has its own distinctive look when compared to the standard five-seat version. There’s a longer rear overhang and a more upright tailgate, so it looks more like a conventional MPV. Overall, the rounded shape is unmistakably Citroen, while the huge windscreen and large glass area mean the cabin is bright and airy, even if you’re travelling seven-up. The dashboard has a futuristic central digital display, while the fixed-hub steering wheel has all the buttons for the stereo, trip computer and cruise control on it, although this can be confusing.

Even with all seven seats in use, the C4 Grand Picasso is a spacious car. There’s a maximum of 1,951 litres available, and you can fold each of the seats with the pull of a single lever. The rear tailgate opens all the way down to the boot floor, and the rear glass opens separately to drop smaller items in. There’s lots of leg and elbow room in the middle row, while up front there’s decent storage – go for the EGS auto, and the gearlever moves to the steering column, making space for a massive bin.

Citroen reliability and build quality has been questionable in the past, and the C4 Grand Picasso doesn’t really do anything to improve on that reputation. Owners have experienced problems with electrics, but hopefully Citroen has ironed things out over time so newer cars will be better. The standard C4 Picasso has a five-star Euro NCAP rating, so the Grand version will also perform well in a crash. Electronic stability control is standard across the range.