The five-seat Citroen C4 Picasso is a stylish, economical and spacious compact MPV that rivals the Ford C-MAX 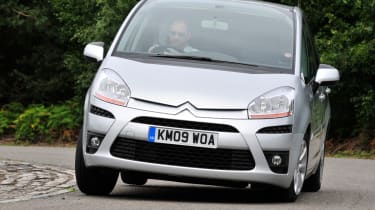 The Citroen C4 Picasso is the firm’s five-seat people carrier and is designed to compete with the Ford C-MAX and VW Touran. It has a futuristic design inside and out, although the sloping tailgate cuts into boot space, while the dashboard’s central digital display and mass of buttons on the steering wheel take some getting used to. The rear seats fold flat into the floor to create a maximum boot space of 1,734 litres, which is bigger than a C-MAX, while the flat load lip makes loading heavy items easy. There are a range of 1.6-litre engines offered, and we’d go for the 1.6 HDi with the manual gearbox – the EGS semi auto is jerky and difficult to live with.

The C4 Picasso is a typical Citroen and is dynamically some way of the pace of rivals like the Ford C-MAX. That said, it's a great cruiser and soaks up bumps in the road superbly. However, the soft suspension means it can feel unsettled and it suffers from lots of body roll in the corners. There are a number of 1.6-litre engines on offer, and a powerful 2.0-litre diesel, but the best option is the 1.6 HDi with the manual gearbox – it offers decent acceleration, even with a full load, and returns good fuel economy, too.

The 1.6 HDi diesel is the best option for low running costs, as the smaller petrol engine is underpowered, and the turbo version is thirstier than the diesel. The HDi returns 54.3mpg with the manual gearbox, but choose the EGS semi-auto and this figure drops to 58.9mpg – although we’d strongly recommend you try this gearbox before you buy, as its slow shifts and jerky reactions take some getting used to. In terms of kit, the C4 Picasso scores well, with the only options limited to a panoramic roof, Bluetooth and sat nav.

The five-seat Citroen C4 Picasso has a different look to the larger Grand model. Both cars have the same wheelbase, but the standard Picasso has a short rear overhang and a sloping rear tailgate. Overall the C4 Picasso looks distinctive and futuristic, and its rounded nose is unmistakably Citroen. All models get alloy wheels, body coloured bumpers and daytime running lights. Inside there’s a large dashboard with a central digital display, while the panoramic windscreen lets lots of light into the cabin.

The Citroen C4 Picasso is a five-seater – you’ll have to spend an extra £1,400 or so for the seven-seat Grand Picasso – but it has plenty of room for passengers. The boot is 500 litres in size, which is 29 litres bigger than the Ford C-MAX’s, but space is compromised by the slope of the rear hatch. The rear seats fold flat, which creates a maximum capacity of 1,734 litres, giving van-like practicality. Up front there is plenty of space and the cabin perfectly complements the C4's practical nature.

The Citroen C4 Picasso scored five stars in its Euro NCAP crash test, putting it on a par with the best in class. It comes with electronic stability control as standard and a full complement of airbags front and rear. There are some question marks over the C4 Picasso’s reliability, but it was the highest placed Citroen in our 2012 Driver Power survey, hinting that drivers were overall quite happy with the ownership experience. However, there have been a number of recalls and the electrics have been known to cause problems.