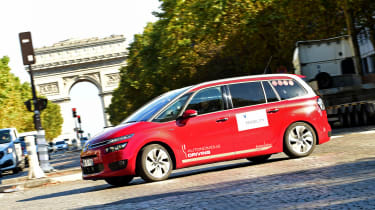 This early prototype shows PSA is working hard to offer both semi and fully-autonomous vehicles within the next five years. The software it is developing needs honing and refining, but early signs are extremely promising.

On the eve of this year’s Paris Motor Show, we were invited to the launch of PSA Peugeot Citroen’s new Free2Move mobility sub-brand. Held at Peugeot’s extravagant showroom on the Champs Elysees in Paris, bosses were brought together to discuss the project among the various partners, start-ups and developers.

Outside sat a pair of unassuming Citroen Grand C4 Picassos, with the words ‘Autonomous Driving’ sprawled down the side. A quick peek inside uncovered a plethora of wires and screens, as well as a sawn-off steering wheel – presumably designed to offer an improved view of the butchered dash.

Fortunately, these cars aren’t only for show. These are very early autonomous prototypes, in which we’ve been gifted a ride around the chaotic Boulevard Peripherique – a multi-lane highway that runs around the centre of France’s capital city. 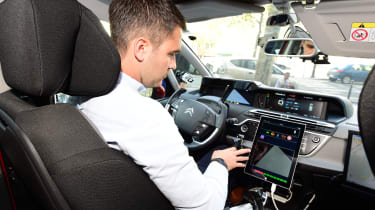 Our guide is PSA’s head of innovation and advanced technologies Vincent Abadie. He’s been responsible for the brand’s autonomous drive tech for more than four years, and is an expert in his field.

We take a seat in the back, while Abadie sits up front and talks us through the setup and what we can expect from the rather crude-looking prototype. The first thing we notice is the BMW-sourced gear lever – likely fitted due to the fact Citroen’s usual steering-mounted shifter would clash with some of the car’s complex systems.

We pull away without any autonomous aids. Abadie informs us it simply isn’t safe to drive up and down the streets of Paris without driver input: “We are not allowed to drive in cities,” he says. “The first step is on motorways.” 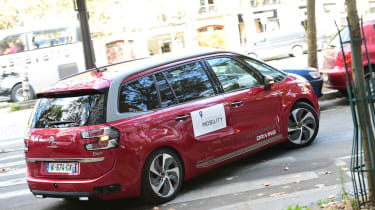 Before long we’re in the middle lane of a three-lane highway. Abadie points to the retro-fitted screen, which is helpfully telling us this Grand C4 Picasso is ready for autonomous driving. He clicks ok, and hands over total control to the car.

The system uses a “complex fusion of radars” as well as thousands of lines of complex code. It also utilises existing features such as traffic sign recognition and lane departure warning. The radars are constantly monitoring the road in every direction to ensure it detects everything, and first impressions are impressive – especially when we get cut up by an impatient Frenchman in a beaten-up Renault Clio.

The set-up isn’t as smooth as Tesla’s Autopilot system, but Abadie insists this will improve through each iteration. We pull through a tunnel and it slows very late for an approaching truck, though there’s no question surrounding the effectiveness of the unchanged brakes – as we come to a halt in good time. The car starts up again without input and automatically pulls all the way up to the 70kmh (43mph) speed limit. 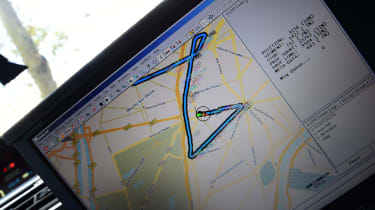 “We have to validate everything,” he tells us. “The autonomous vehicle is very polite. It lets other vehicles pull past – and this is why our first steps are on the motorway.”

He insists cars are more predictable than humans, and that this is the main reason they can’t test in town just yet. While cars can only move left or right, people can change their minds in a split second, stepping out into the road or across an intersection without warning.

Abadie says the system has been tested up to 130kmh (81mph), though it’ll only operate within the set speed limits due to laws and legislation. As a result, our brief trial was at very low speeds, but there’s no reason to suggest it’d act any differently the faster you go. There’s no denying it needs refining, but as a concept or principle, the PSA Group is right on track.