Does the entry-level trim spoil our favourite compact MPV? We test the Citroen C4 Picasso Touch Edition to find out 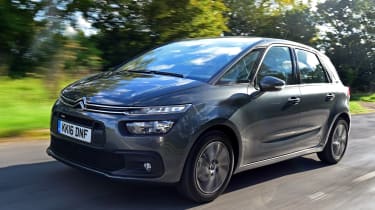 While the 1.2-litre petrol doesn't make as much sense to most buyers as the 1.6-litre diesel model, the Citroen C4 Picasso Touch Edition looks like a great buy whatever powertrain you go for. The C4 Picasso’s comfortable ride and plush interior remain even on these entry-level cars - giving you a sense that the car cost much more than it actually does - and, of course, it's also one of the most practical MPVs available. Plus, the quirky looks and strong refinement only add more strings to its bow.

The Citroen C4 Picasso was already our favourite MPV out there, and a recent facelift has seen the car easily retain its title. We've now had the chance to see how this new Touch Edition model, the entry-level trim, fares with Citroen's 1.2-litre Puretech petrol on board.

Despite the displacement, the Puretech unit is actually a three-cylinder - which is unusual in a world full of 1.0-litre triples. That's no bad thing from behind the wheel, of course, as the 1.2 has plenty of poke, even with a family on board. The turbocharged petrol is a little boosty in nature, which means there's a surge of acceleration at medium revs as the maximum torque of 230Nm kicks in.

That's good and bad, as while it makes the car feel lively and quick both around town and on the motorway, it does make driving smoothly a bit more difficult, as you need to pay careful attention to the revs. That's not so easy with the manual gearbox, which is notchy and has oddly-spaced ratios - so you often feel like you're in the wrong gear. Coming up to a junction, first gear gives you too many revs while second doesn't give enough, which is a frustration. 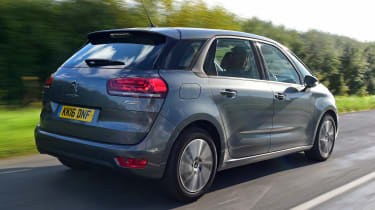 Those are really the only problems with the unit, as it actually sounds great and has plenty of power, Even though the gearbox isn't perfect, it's still more fun than an automatic. It's a bit at odds with the handling character of the C4 Picasso, with its light steering, comfortable ride and relaxed feel, so we'd still prefer the 1.6-litre diesel version - which is only a few hundred pounds more and manages 74.3mpg compared to the petrol's 56.5mpg.

Everything in the C4 Picasso is geared towards comfort for the passengers inside, which is why it's such a great car - it makes any journey stress-free. The light steering might take away from the driving enjoyment but it makes the car very easy to drive and it's the same story with the supple suspension and the huge windscreen that gives lots of visibility.

It also lets lots of light into a cabin that, even on this entry-level Touch Edition model, feels very upmarket. The materials inside are of a high quality, feel good to the touch and look great as well. The design of the dash is simple and clean, with the instrument cluster in the middle for a neat, symmetrical look. There's a high-res display screen for the radio and media but this model misses out on the larger second screen that the more expensive C4 Picassos get. 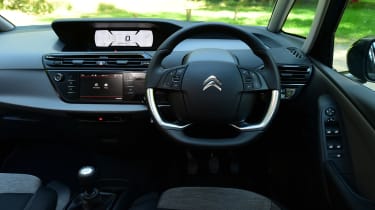 One problem the touchscreen presents is that it houses the heater and air-conditioning controls, meaning it's fiddly and annoying to change settings if you want to do it quickly. We'd much prefer easy-to-use buttons that don't force you to look away from the road to use them.

Inside the Touch Edition is every bit as pleasant to be in as the higher-spec models, making them look pretty expensive in comparison. In fact, if you normally use your phone instead of in-car sat-nav, this value version could be perfect for you, saving loads of money and still feeling like a very grown-up car.

The kit list is great too, and while those who want the latest toys will upgrade to a higher-spec car, the Touch Edition will be more than enough for many. You get climate control, cruise control, front and rear electric windows, a touchscreen display, Bluetooth, USB and even 16-inch alloy wheels as standard.

You still get all of the Picasso’s practical touches too, such as the sliding rear seats that fold in several ways as well as reclining. With 537 litres of boot space, or 1,851 with the seats down, there's a huge amount of space in the back - plenty for a buggy or kids bicycle. In fact, there's room for several adult-sized bikes with the rear row folded down. There's no lip on the opening either, so loading them in is easy.