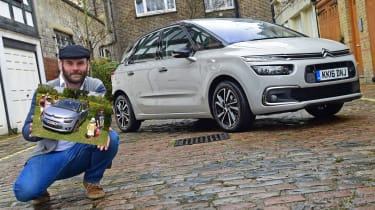 It’s a fond farewell to the C4 Picasso. The Citroen offers a brilliant blend of versatility, individuality and usability in an affordable and efficient five-seat package. It’s not hard to see why with a few tweaks to keep it fresh, this facelifted model is still our favourite MPV.

The time has come to say goodbye to one of the most faithful members of our fleet. The C4 Picasso is leaving us, and even though my tenure with our favourite five- seat MPV has been short, it’s been very sweet.

The Citroen became something of a pool car due to its incredible versatility, and with a family to keep on the move, I was lucky enough to spend plenty of time with it.

I previously ran the seven-seat version – the Grand C4 Picasso – back in 2014 and this facelifted five-seat model immediately reminded me why I loved that car. While the tweaks to the tech have improved things, it was great to get reacquainted with some of the Citroen’s finer features, including that unusual but ergonomic dash, the easy driving experience (even in this manual, although I still prefer the smooth, relaxed auto) and the pair of screens that serve up all the information you could ever want. 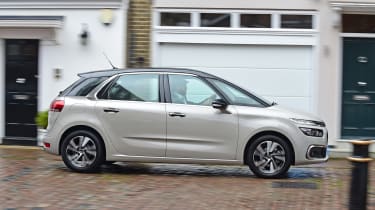 Three years is a long time when you have kids, and since I ran the Grand Picasso, my children have grown considerably. But they found there was still plenty of room in the back of its smaller sibling, helped by the middle row of seats sliding independently.

Thanks to that large windscreen, everyone gets a good view out, too. They also remarked on how useful the sliding rear-window blinds are. These come as part of the £150 kids’ pack and prove there’s no better way to road test an MPV than by loading it up with family. As we’ve already proven, the C4 Picasso is also great at swallowing stuff, as any MPV worth its salt should be. I put it to the test with some off-cuts of wood, and while senior staff writer Sean Carson criticised the power trailgate in the last report (below) for being a bit slow, I found it useful with a big bundle of timber under my arm. 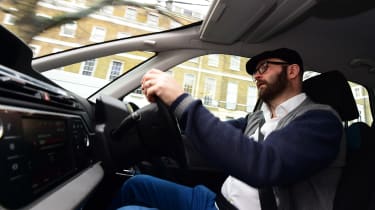 I even think the £520 Soft Sand paintwork (new for the facelifted Picasso) looks really nice and works well with the £400 contrasting black roof. It’s understated and shows that, while the quirky design might not be to everyone’s liking, it can look a bit classier if you choose the right options.

In fact, over my time with the car I’ve struggled to find any major negatives. I did have one minor gripe, though – even though they’re standard, I don’t see the point in massaging seats if they’re not heated. 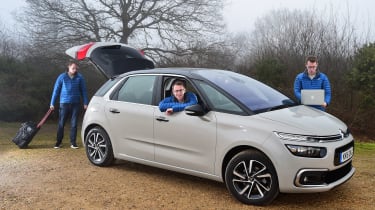 Our last report on the Citroen C4 Picasso (below) proved that it’s not just good at carrying people. Having easily done its best impersonation of the Tardis, it swallowed a whole load of furniture as well.

Straight away, it highlighted Citroen’s five-seat MPV is just that – a truly multi-purpose vehicle. However, to be a great people carrier, it has to excel at its primary brief – carrying a full complement of passengers in comfort.

I’m glad to report it does, offering much more in the process, too. I’ve been ferrying friends and family around recently and noted feedback from each of them, so here’s a perspective from each seat, starting with my view from behind the wheel. 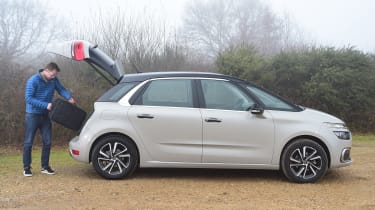 The expansive windscreen and split A-pillars give great visibility, so everything from junctions in tight city streets to motorway lane changes are simple. Such a small detail makes it feel surprisingly calm and tranquil, which is backed up by the softly sprung chassis. The damping is nicely judged and the Picasso gently oscillates over anything but the worst of bumps.

The driving position and seat comfort are good, too, while the 1.6 BlueHDi diesel is punchy and flexible. Our car also features massaging front seats, and while they’re not up to Mercedes S-Class levels, they’re a useful convenience feature.

Front passengers benefit from the same great view and get the best access to the on-board tech. The updated C4 Picasso gets Apple CarPlay and MirrorLink for Android, and once you’ve hooked up your phone via Bluetooth, you can share its data to turn the Picasso into a mobile hotspot. 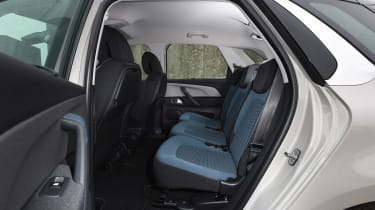 However, while it’s nice to have, the interface still isn’t the best, as the seven-inch touchscreen lags behind your inputs, and the MirrorLink connectivity software is clunky compared with Android Auto.

There’s a cavernous level of space in the back. Access is easy, and the seats slide individually so you can prioritise boot space or legroom. Storage compartments under your feet give plenty of room for items, and there’s a huge central bin in between the front seats. Travelling in the back, I was struck by how much the big front windscreen is a benefit. It extends so far back that even without the £699 optional panoramic roof, the interior doesn’t feel claustrophobic.

With the seats slid back, there’s 537 litres of boot space, rising to 630 litres with them forward. The powered tailgate – which takes an agonisingly long time to open and close – is the only real practicality letdown. 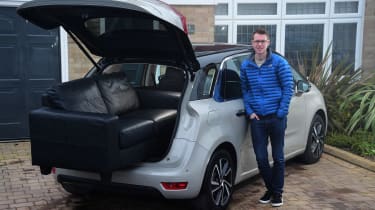 Sometimes we might go to a dealer to take delivery of a new test car, talking through its merits and our choice of options with a salesperson so we’re fully up to speed.

However, despite a recent facelift, we’re pretty familiar with the Citroen C4 Picasso’s strong points, so we pressed this revised version of the firm’s five-seat MPV into service straight away.

Its credentials as a true multi-purpose vehicle are exactly what I was aiming to explore on a recent trip to the north-east. A family friend’s house move meant they needed to dispose of a barely used sofa,so with an ageing couch looking sorry for itself at my home, I shot off in the C4 up the M1 to Newcastle to pick up a replacement.

The Picasso proved it’s good for carrying not just people but all manner of items – and it’s easy to load up, too. Each rear seat slides and folds individually, so with the tug of a cord the backrests folded into the floor quicker than you can say “flat-pack furniture”.

With the seats stowed away, there’s a massive 1,851 litres of load space on offer. Or to put it another way, more than enough to swallow a full settee, a coffee table, a chest of drawers, a couple of paintings and a few boxes full of general junk, while still being able to see clearly  out of the rear view mirror. If Doctor Who drove a car, it’d be a Citroen C4 Picasso, such are its Tardis-like credentials. 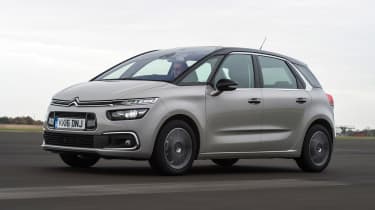 Our mid-spec £23,290 Feel model is fitted with Citroen’s 118bhp 1.6-litre BlueHDi 120 turbodiesel engine and a six-speed manual gearbox. The latter isn’t so good, with a notchy, indistinct shift action, but thankfully the motor is brilliant.

With 300Nm of torque available from as low as 1,750rpm, in heavy motorway traffic you hardly have to use the gearbox, because the flexible engine pulls from low down when the cars in front clear. It’s also extremely efficient. Over the past 1,000 miles – more than a third of it carrying a heavy load – the Citroen has returned 51.8mpg. On top of the frugal fuel economy, the car’s soft, forgiving ride makes it a great long-distance cruiser.

And there’s plenty of tech on board if you’ve got lots of miles to cover. There’s a good level of smartphone connectivity, with MirrorLink and Apple CarPlay included, as well as the option to turn the Picasso into a Wi-Fi hotspot (more of which we’ll explore in the Citroen’s next report). 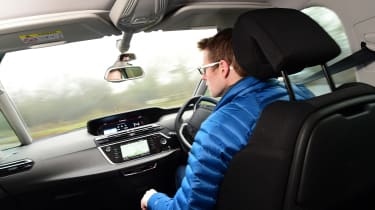 However, the infotainment and climate control are accessed through a seven-inch touchscreen, and while the graphics are clear enough, the system often lags behind your inputs, initiating a frustrating number of wild prods at the screen.

The 12-inch widescreen display above this is cool, though, and gives the C4 Picasso’s cabin a futuristic feel.

Other options include metallic paint at £520. On a grey January day our test car’s paint looks just that, but it’s actually a new colour called Soft Sand that contrasts nicely with the £400 black roof. Along with the revised front end, the two-tone roof and our car’s 17-inch Mamba alloys are new to the C4 Picasso. So is the Wild Blue Ambience interior with fold-flat front seat that came in handy shifting other items in the move.

An £800 suite of driver assistance systems, including lane departure warning and blind spot assist, auto full beam lights and radar guided cruise, also keeps a watchful eye over you and your cargo – whatever it might be.