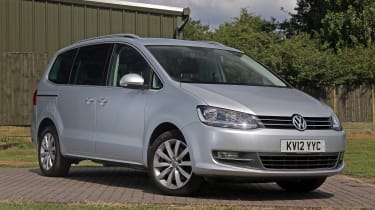 People carriers have fallen out of favour, as buyers have shifted to crossovers. But don’t be too keen to follow the crowd if you’ve got a large family to transport, because nothing can match the usability of a full-size MPV. The problem is that many car makers gave up on this segment a while ago, recognising that tastes have changed. As a result your choices are limited, but we’d say the Sharan is one of the best options with its sliding doors, efficient engines and roomy cabin. The SEAT Alhambra and Ford Galaxy can be bought for less, though, so haggle hard to make sure you get your Sharan at the right price.

Volkswagen should know a thing or two about MPVs. After all, it built the first one, the Type 2 – which it introduced as long ago as 1949. Incredibly, the Type 2 stayed in production all the way until 2013, by which point VW had launched a more mainstream people carrier, the Sharan.

This had been developed with Ford and launched back in 1996. An all-new Sharan followed in 2010, but was now unrelated to its Ford Galaxy rival. Seven years after its introduction, the Sharan still has what it takes thanks to its excellent refinement, car-like driving experience and typically solid VW interior. Trouble is, reliability can be a little patchy, so here’s what to look for. 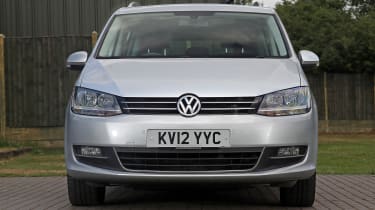 The first Sharan Mk2s arrived in UK showrooms in November 2010. Buyers could pick from S, SE, SEL and Executive trim levels, while there was a choice of either 1.4 TSI petrol or 2.0 TDI diesel engines, with the latter coming in 138bhp or 168bhp forms. For those in a hurry there was a 197bhp 2.0 TSI petrol option, but as with the 1.4 TSI, sales of these were low and this edition was dropped within a couple of years; you’re unlikely to find one for sale.

In October 2015 a refreshed Sharan was revealed, but changes were minimal. All engines were now Euro 6-compliant and more efficient than before, while all cars got additional standard equipment.

Even the least powerful engine, the 2.0 TDI 115, offers enough muscle for relaxed cruising, while manual and automatic boxes are superb to use. 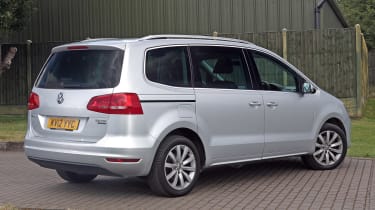 Alternatives to the Volkswagen Sharan Mk2

The closest rival is SEAT’s Alhambra – the same car, but with different badges. As a result you get the same engines (albeit with no 2.0 TSI option) and transmissions, but more for your money.

The Ford Galaxy is the UK’s top-selling MPV, so there are lots on sale, and this full-size people carrier is terrific value as well as roomy, well equipped and comfortable. 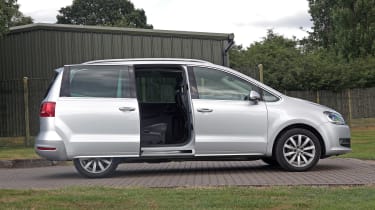 If space isn’t a priority and you’d prefer something more fun to drive, take a closer look at the Ford S-MAX. Buyers focusing more on carrying capacity should consider the Kia Sedona and Chrysler Grand Voyager; both are now defunct, and strong value.

Third row of seats is too cramped for adults, but there is a rare six-seater Executive option which increases the amount of space.

Parking sensors are standard only on SE models and above. There’s also a parking camera option, but not if a DAB radio is fitted.

Sharans with the 2.0 TDI engine have an AdBlue tank that has to be topped up; it can use a litre every 500 miles, which soon adds up.

The automatic lights can come on even if it’s not that dark. Using the correct diagnostic equipment, dealers can recalibrate. 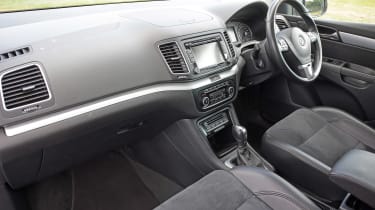 It’s pure VW inside, so build quality is excellent, as is the clarity of the layout. But there’s little in the way of flair. This is one of the biggest MPVs going, so practicality and cabin space are superb; the boot stows 300 litres with all of the seats up and a massive 2,297 litres with rows two and three folded.

Sharan owners can choose fixed or variable servicing, the former at 10,000 miles or annually. The latter allows up to two years or 20,000 miles between checks. Services alternate between minor and major, and prices vary up to the car’s third birthday; then they’re set at £164 and £329.

Both the TSI and TDI engines are fitted with a cambelt which should be changed every five years or 80,000 miles; expect to pay £434 for this on a petrol engine, or £399 on a diesel. Brake fluid needs renewing every two years (£64) and the air-con should be serviced, too (£79). 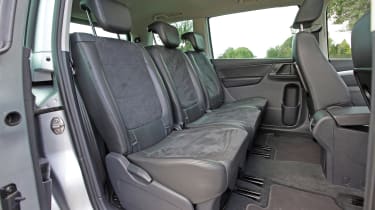 It’s impressive that the Sharan has been recalled only once in the seven years since its launch; this affected just 38 models (and included some Touaregs). The gas generator canisters for the side airbags could fail through damage in an impact and lead to the canisters exploding. The recall affected cars built from 23-28 January 2015, and was issued in April 2016. Diesel versions of the Sharan made from 2011 to 2015 with AdBlue systems were involved in the Volkswagen emissions scandal.

This generation of Sharan has never appeared in our Driver Power surveys because it’s not a big seller. However, we’ve not heard of any major issues outside the emissions recall affecting the MPV.