The Volkswagen Sharan seven-seater has had a mid-life refresh to keep pace with new MPV rivals. Have the changes done the trick? 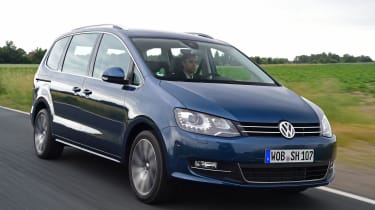 In purely cosmetic terms, the latest Sharan refresh is as subtle as they come, but then style isn’t a top priority for MPV buyers. Extra equipment, efficiency improvements and slight interior upgrades are welcome, and it’s good to see VW hasn’t messed with the Sharan’s most appealing feature – space. The glaring problem though is its high price tag – especially given that it has a genuine premium (and similarly priced) rival now in the shape of the BMW 2 Series Gran Tourer.

The seven-seater MPV market isn’t what is was when Volkswagen first launched its Sharan 20 years ago, but it’s still alive and kicking. Ford is poised to launch new version of the Galaxy and S-MAX, plus BMW is muscling in with the 2 Series Gran Tourer. To keep its old girl competitive, VW has treated the Sharan to a light refresh. ‘Light’ is definitely the word for the exterior facelift – the rear light clusters are now LEDs and have a new design, and that’s it on the outside. In the cabin there’s a new steering wheel and upholstery, and to keep the Sharan in step with the latest Volkswagens in the range it gets VW’s latest second-generation touchscreen infotainment system as standard – for an extra £100 you can add Apple CarPlay, Google Android Auto and MirrorLink functions, too. Although originally launched back in 2010, the Sharan still has one of most versatile and sturdy interiors in its class. The dashboard design is practical rather than stylish but there are plenty of cubbies, two large storage places in the roof and lots of space for the driver and front seat passenger to get comfortable. 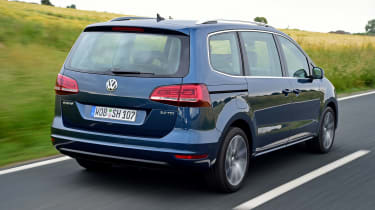 The middle row of seats can slide forwards and backwards independently, and there’s the option of the outermost ones becoming child booster seats for £400. One tug of a handle tilts the outer seats forwards, too, allowing easy access to the third row. Six-footers will struggle with headroom in the third row, but there’s decent head and knee room for smaller adults and children can stretch out. With the rear seats in place, boot space is still a respectable 300 litres; drop all five seats there’s a van-like 2,297 litres on offer. There’s also a large list of options available including electric sliding doors for £620 and an electric tailgate for £495 as well as roof racks, cool boxes and dog guards.    All engines are now Euro-6 emissions compliant, and the line up includes a 148bhp 1.4-litre turbocharged petrol along with two 2.0-litre diesels with 148bhp or 182bhp. There are also two transmission options – six-speed manual or six-speed DSG. We got behind the wheel of the lower-powered diesel with the manual ‘box and it’s easily the best combination. 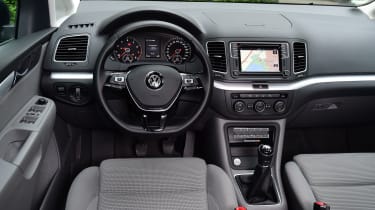 The 2.0-litre diesel offers plenty of punch thanks to 340Nm of torque, but returns economy and CO2 emissions of 56.5mpg and 130g/km respectively – that translates to £110 road tax a year and is someway off the BMW 118d Gran Tourer’s 64.2mpg and 115g/km. Unsurprisingly, the BMW is also more involving to drive, but the Sharan offers a nice blend of supple suspension, good body control and accurate steering – it’s probably the best all-rounder in the class considering the target audience. At cruising speeds, it’s a hushed place to be too being nicely insulated from wind and road noise. However, with prices ranging from £26,300 to £36,280 it’s at the upper end of the segment and on par with the BMW 2 Series Gran Tourer. So while there’s no doubting how accomplished the Sharan is, it’s an expensive way to transport seven people. Which is why we’d point you towards the SEAT Alhambra – also recently refreshed – as it offers a near identical package for less cash.