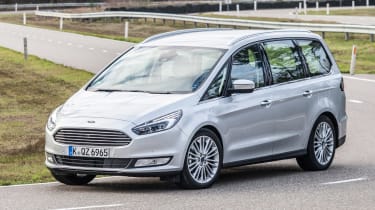 As with the S-MAX AWD, the Ford Galaxy AWD is difficult to justify in the UK market due to its higher running costs and purchase price. It’s still good to drive, practical and has plenty of equipment on board, so don’t be put off the seven-seater as a whole. We’d just save some money and go for the front-wheel-drive version instead.

Ford’s all-wheel-drive range continues to expand, with this new Galaxy AWD being added to the line-up just in time for the cold snap to hit most of the UK.

• Best seven-seater cars on the market

When we drove the S-MAX AWD, we decided it wasn’t worth the extra money over a regular front-wheel-drive model unless you expect to be spending a lot of time in challenging conditions. And unsurprisingly, it’s the same story with the new four-wheel-drive Galaxy, which costs around £1,500 more than the otherwise identical 2WD car. 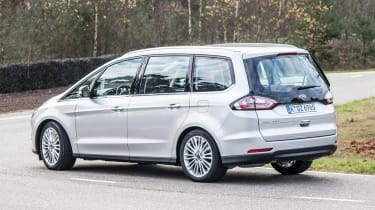 The extra 58kg added by the AWD system means efficiency takes a hit: the car claims 52.3mpg fuel economy compared to 56.5mpg and 139g/km emissions instead of 129g/km, so it will be more expensive to run. It’s slower, too, getting from 0-62mph in 12.2 seconds compared to 10.9 seconds for the equivalent front-driven version.

Around Ford’s proving ground in Lommel, Belgium, the four-wheel-drive Galaxy served up plenty of grip, even over the slippery cobblestone section. There’s quite a bit of body roll in corners, but that’s to be expected from a large MPV like this – and it’s partially the result of a more comfort-biased suspension set-up. The steering is well weighted, too, and while wind noise at motorway speeds is noticeable, it’s not overly intrusive. 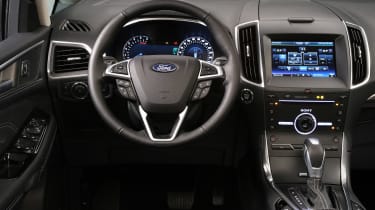 All of this is true of the standard front-wheel-drive car as well, though. The boot capacity is unchanged at 300 litres with all seven seats in place and 1,301 litres with the third row of seats folded flat, which is good news. However, you really don’t get much for your £1,500 extra if most of your driving takes place on normal British roads.

Very few cars in this class have four-wheel drive, so the Galaxy fills a niche where Ford clearly sees potential customers – but for most people we’d recommend the standard front-wheel-drive model, and we’d push those who do want to head off-road in the direction of a Land Rover Discovery Sport.