The Ford Galaxy is bigger, more practical and slightly more luxurious than the S-MAX 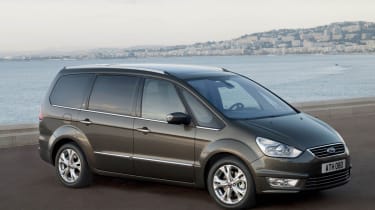 In a world where full-size MPV sales are being dominated by an ever-increasing range of crossovers and SUVs, the Ford Galaxy remains a constant – favoured by families and mini-cab drivers alike.

Introduced in 2006, the Mk3 Ford Galaxy is starting to show its age. But with very few direct rivals, the huge boot, impressive passenger space and strong performance mean it is still one of our favourite seven-seat MPVs. While the fun-to-drive Ford S-MAX is targeted at a younger audience, the practical Galaxy majors on comfort and space.

There's a range of frugal diesel engines, as well as a pair of powerful petrols. Our advice would be to steer clear of the range-topping 2.0-litre EcoBoost as it'll return less than 35mpg. A top-spec 2.2-litre TDCi diesel will crack 40mpg and sprint from 0-62mph in exactly the same time.

Direct rivals are hard to come by in the current market. The SEAT Alhambra and Volkswagen Sharan both have seven-seats, and both add the boon of sliding rear doors, while if you're prepared to buy used – the Renault Espace and Chrysler Voyager offer similar amounts of space. If none of these take your fancy, you'll need to look at seven-seat SUVs, such as the Kia Sorento and Hyundai Santa Fe.

• The best MPVs on sale now

An all-new Ford Galaxy is on its way. Its release date is yet to be confirmed, but it will likely get a new bold grille and swept-back headlights. It will also have Ford's latest SYNC technology including a Wi-Fi hotspot, so passengers can surf the Internet. We would expect the rear seats have docking stations for tablet computers, enabling occupants to charge and integrate their own devices with the car.

The Ford Galaxy drives better than any full-sized seven-seater on the market. In fact, the Ford Galaxy proves that practicality and fun don’t have to be mutually exclusive. It’s not quite as agile as the sportier S-MAX, but it has great steering, corners with poise and resists body roll. It also has a compliant ride and seems to completely insulate occupants from road and wind noise, even at motorway speeds. The incredible all-round visibility, combined with light controls, make the Ford Galaxy a pleasure to drive. However, there’s no denying that the big MPV dimensions do make it harder to nip around in traffic.

There’s no doubt about it – if you want to minimize your fuel and tax bills, go diesel – while the Ecoboost petrols are smooth and quick, they just can’t compete. The 138bhp 2.0 TDCi strikes a good balance, returning 53.3mpg and 139g/km of CO2. The entry-level, tax-friendly 113bhp 1.6-litre TDCi version matches this, so unless your budget can't stretch to the more powerful version, we'd avoid it.

As for other running costs, the Galaxy is a large car, so you can expect heavy tyre wear. Budget a reasonable amount for diesel servicing, too, which stand at 12,500 miles regardless of which Ford Galaxy you buy.

The Ford Galaxy gets the thumbs up from most owners when it comes to running costs. They told us, in our Driver Power survey, that the Ford Galaxy is economical for a big car, presents great value for money and is practical.

Full-size seven-seat MPVs are few and far between on UK roads these days. The might of crossover and SUV sales has hit the market hard, with their sleeker styling partly to blame.

That's not to say the Ford Galaxy is an ugly car. It's much boxier than the sportier S-MAX – that’s the price you pay for the extra space on board – but it still boasts plenty of stylish touches, such as neat LED-style tail-lights.

As with the S-MAX, the Ford Galaxy's driving position is great. You sit high but still low enough so that you don’t feel you’re ‘on top’ of the car, while the A-pillars are slim, so it’s easy to see out. The driving position has loads of adjustment, the dashboard is well made with lots of soft-touch materials, and all the controls are logically placed.

The Galaxy’s big plus over the S-MAX is the fact that adults really can travel in the sixth and seventh seats. Despite having similar dimensions, the Ford Galaxy boasts increased headroom which means passengers have little problem getting comfy; they can even slide the seats individually and recline them. With the rear chairs in place boot space is still a respectable 308 litres – which is about the same as offered in a supermini. There’s a huge amount of room in five-seat mode, and with everything folded flat, there’s an enormous 2,325 litres, rivaling small vans for loadspace.

There’s a great deal of practical storage in the Ford Galaxy too. The centre cubby is deep, the side door bins are big enough to accommodate large bottles, and you can get under-seat drawers.

The Galaxy has loads of airbags on-board, including front and side airbags for the two front seats along with window airbags for the front two rows. There's also a knee airbag for the driver too. Factor in standard traction and stability control and a five-star Euro NCAP crash test rating for adult safety and you’ve got a very safe MPV. Safety for child passengers was awarded a solid four stars.

It should be pretty reliable too. Ford finished mid-table in the 2014 Driver Power owner satisfaction survey, and the Galaxy did surprisingly well. The only thing that counts against it is its age, but with such a large dealer network, if anything does go wrong then it should be easy to fix.