Ford's updated Kuga SUV will go on sale before the end of the year, priced from £20,845 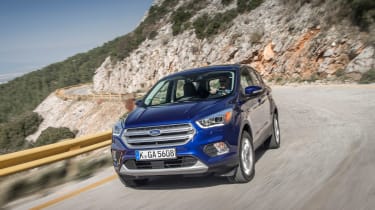 The flagship Vignale version, with bespoke styling and a more upmarket interior, begins from £30,795 with the 148bhp 2.0-litre TDCi diesel engine and front-wheel drive. It can also be specced with a 178bhp version of that engine (with all-wheel drive), as well with the 179bhp 1.5-litre Ecoboost petrol with an automatic gearbox and all-wheel drive. 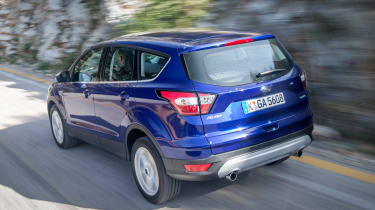 As you can see from the images, the new Kuga benefits from a revised front end with tweaked grille design, restyled LED daytime running lights, and reshaped bumpers with foglamps in a different place. The back end is being updated with a reshaped bootlid and tail-lamp treatment. Top spec models retain the fake diffuser and twin exhaust outlets, as well as the rear lights in the bumper.

Buyers get a choice of 17, 18 or 19-inch wheels, plus two new colours: Guard Grey and Copper Pulse. It can also be specced with an electrically retractable towbar built into the rear bumper. Ford is hoping that the updates will gift the Kuga an extra level of sophistication.

Inside, Ford says the dashboard has been crafted to offer a more ergonomic design, although it doesn’t look that different from what has gone before. The screen is bigger and there are fewer buttons for the air-con and audio system, while the centre console has been cleared up with an electronic parking brake. New kit such as a heated steering wheel also features.

All auto models now also feature steering wheel-mounted paddles for improved driver enjoyment. Ford’s Adaptive Front Lighting system will be available on the Kuga, too. This reads the road ahead and can adapt the lighting style to match speed, steering angle and distance from the car in front. Boosting the SUV’s safety credentials are Intelligent four-wheel drive, torque vectoring and ‘Curve Control’, as well as Cross Traffic Alert and Active City Stop auto braking. 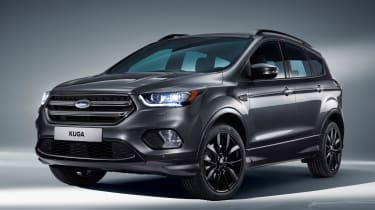 Under the bonnet, the big news is the introduction of a more efficient 118bhp 1.5-litre diesel, which Ford says delivers 64.2mpg and 115g/km CO2 emissions. While it doesn’t replace any other engine, it should prove a fleet favourite, sitting under the 148bhp and 178bhp 2.0 TDCi units. A new 1.5-litre turbo petrols is also offered with 118bhp, fuel economy of 44.8mpg and CO2 emissions of 145g/km.

The new Kuga will sit among five new or redesigned Ford SUVs due in the next three years. It joins the updated EcoSport and all-new Edge, with two further models still to come.

Earlier this year, Ford announced the European arrival of its SYNC 3 infotainment system. It debuted on the Mondeo, S-MAX and Galaxy, and will also feature in the Kuga. 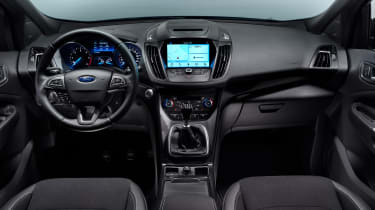 Ford says the set-up lets drivers control their connected devices “with more conversational voice commands”. Owners can simply tell their car “I need a coffee” or “I need petrol”, and the navigation system will direct them to the nearest and most appropriate facilities.

SYNC 3 is compatible with apps including Spotify and AccuWeather for local forecasts, and it can even install updates via your home WiFi. The user experience is simplified, with fewer steps required for the system to function, plus processing power is increased. Ford has also added Apple CarPlay and Android Auto. All SYNC 3 systems get an eight-inch touchscreen, with familiar pinch-to-zoom functionality.

What do you think of the new Ford Kuga? Let us know in the comments section below...

Welcome to our Geneva Motor Show hub page, scroll down for all our Geneva content...
Ford Kuga vs Toyota RAV4 vs Skoda Karoq