With updates inside and out, plus new EcoBoost petrol engine, does class leader strengthen its position at top? 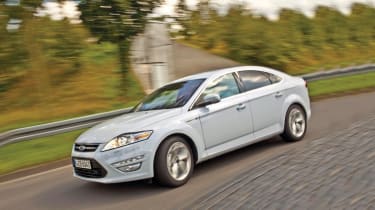 The updated Mondeo is better than ever. It looks good inside and out, but the star of the show is clearly the 2.0-litre EcoBoost engine. This delivers real driver appeal, with surprisingly low running costs. Factor in the slick PowerShift dual-clutch gearbox, and it makes for a strong combination. However, the benefits won’t be enough to tempt business users away from cheap diesels, and it’s likely that updated 2.2-litre TDCi units will continue to be the best sellers.

Ford's hopes of staying on top of the large family car market have just been given a real boost!

Meet the new and improved Mondeo. Not only does it benefit from cosmetic updates inside and out, it also gains an all-new 238bhp EcoBoost turbo petrol engine that offers hot hatch pace and 37.7mpg fuel economy. But is it a winning formula?

Auto Express took the wheel in an exclusive drive to find out.

First impressions are positive. The current Mondeo was introduced in 2007 and, while it still looks sharp, the latest cosmetic tweaks have been inspired by premium models such as Audi’s A4.

At the front, there are new daytime LED running lights, which give it more road presence. Plus, two grooves in the bonnet and a redesigned grille help to bring the newcomer in line with the new blue oval face, debuted by the S-MAX. The same set-up will appear on the upcoming Focus.

Inside, Ford has tried to make the Mondeo feel even more like a premium product. Ambient lighting and chrome detailing on the steering wheel and switchgear feature, while there are improved, soft-touch materials. On the move, extra sound insulation ensures there’s a marked reduction in noise, too.

However, the biggest news of all is the arrival of two range-topping high-performance engines – a 2.0-litre turbocharged EcoBoost petrol unit with 238bhp, and an uprated 2.2-litre TDCi Duratorq turbodiesel. The latter delivers 12 per cent more power than before, at 197bhp. Buyers will still be able to specify the current 200bhp EcoBoost petrol engine and 2.0-litre diesel units in 112bhp, 137bhp and 160bhp guises in the revamped body shape.

We drove the 238bhp petrol model, and it’s hugely impressive. The most powerful Mondeo engine ever – and likely to star in the new Focus ST – it launches the newcomer from 0-62mph in 7.5 seconds and on to a top speed of 144mph. At low revs, the unit doesn’t seem particularly special, but once the turbochargers kick in above 1,900rpm, the Mondeo feels very quick. It’s worth mentioning, however, that drivers hoping for an all-round performance package will be disappointed by the lack of a sporty exhaust note.

A six-speed twin-clutch PowerShift automatic transmission is the only gearbox available, and it offers fast, seamless changes. We rarely felt the need to put the selector into manual mode and take control ourselves, although it would be useful to have steering paddleshifters.

Prices haven’t yet been announced, but this range-topping engine is available only in Titanium, Titanium X and Titanium X Sport trim levels. That means even the most basic model should cost around £24,000 – a lot for a car without a premium badge. But the quality cabin, strong economy and stunning performance certainly make this Mondeo feel premium class.