The latest Mondeo is the best family car money can buy. 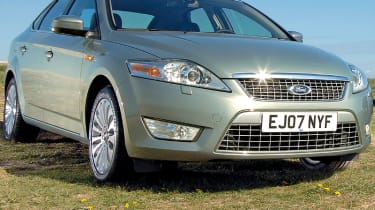 Driving All-round refinement is definitely a Mondeo strong point. No rival cruises as comfortably at high speeds or deals with coarse surfaces so well. It even delivers a cosseting ride around town. We tested a model fitted with Ford’s Interactive Vehicle Dynamics Control (IVDC) electronic dampers. In short, it feels unflappable thanks to its awesome suspension control, which in turn inspires confidence. It slices through corners, the steering is light yet extremely accurate, and unlike some rivals, it never feels heavy or cumbersome – quite an achievement given the hefty 1,615kg kerbweight of the test car. And impressively, even models without the electronic suspension are able to provide a similarly class-leading drive. However, that hefty weight means that, while the best-selling 2.0 TDCI 140 has competitive power and torque, it doesn’t have particularly meaty mid-range response or crispness. Nor is the four-cylinder unit the last word in smoothness or noise suppression. As you’d perhaps expect, cheaper 1.8-litre and 2.0-litre petrol versions require far more work, making them similarly intrusive. Mind you, on the move, the engines are only noticeable because there is barely a trace of wind or road noise.

Marketplace The striking Mondeo is certainly dramatic to look at, although the ‘Kinetic Design’ styling that has attracted so much attention isn’t as cutting-edge in reality as we’d expected. Overall, we think it comes across as slightly fussy. Ford has gone overboard on the detailing, resulting in a car that looks as if it’s wearing too much make-up. But the main thing that will strike people when they first see the Mondeo is the size. It’s huge – wider and taller than a BMW 5-Series, and only 60mm shorter. It still competes against familiar rivals, such as the Vauxhall Vectra, Renault Laguna, Honda Accord, Volkswagen Passat and Peugeot 407, though it is premium models like the BMW 3-Series, Audi A4 and Saab 9-3 that are arguably this car’s fiercest rivals. Ford will be hoping a vast choice of engines, three bodystyles and four trims will swing the balance: the line-up consists of nearly 100 unique models!

Owning No rival can match the Ford for space or versatility inside. Its load bay is cavernous and the rear cabin palatial. The interior itself is sporting and futuristic, characterised by swept-back A-pillars and shallow angles. But once you open the heavy doors and settle into the equally spacious driving environment, you realise that, once again, Ford has overdone the glitz, while letting some things slip through the net, too. The speedo increments are hard to read, the seat doesn’t go low enough, stowage isn’t well organised on the centre console and overall it doesn’t quite give off the impression of quality a VW Passat does. We do like the screen mounted between the dials though, easily controlled by steering wheel-mounted buttons. However, drivers won’t like the economy – during three tankfuls, we failed to top 40mpg in the 2.0 TDCi, while emissions place it in a higher company car tax band than its key rivals. The 2.0-litre petrol was even worse, averaging just 28.2mpg. Retained values are unimpressive for such a new car, too: under 38 per cent is a full 10 per cent down on Honda’s excellent Accord. At least running costs are impressive, thanks to keen servicing prices from Ford’s vast UK dealer network.