The majority of Ford Mustang buyers in the UK are choosing the 5.0-litre V8 option 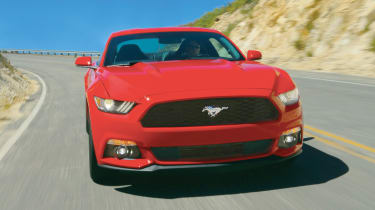 More than half a century since it first went on sale in the US, the Ford Mustang is now officially available in the UK. Ford claims to have taken almost 2,000 orders since January, with over 70 per cent of buyers speccing the powerful 5.0-litre V8 petrol engine.

That means just 30 per cent of customers have favoured the comparatively economical 313bhp 2.3-litre EcoBoost unit – despite promises of more than 35mpg and CO2 emissions of 179g/km. The 5.0-litre V8 will return just 20.9mpg.

Ford has also confirmed four out of five customers have chosen the Fastback (coupe) body style rather than the Convertible. The six-speed manual transmission has also won the heart of 55 per cent of buyers, with the rest opting for the six-speed automatic.

Over 1,000 of all specified UK Mustangs have had the £1,795 Custom Pack added, which brings features like sat-nav, heated and cooled front seats, a rear-view camera, a 12-speaker Shaker Pro sound system and exterior detailing upgrades.

It’s not too late to specify your Mustang either, with prices starting at £29,995 for the EcoBoost model and £33,995 for the V8. First deliveries are expected from November.

Now read our full review of the new Ford Mustang.