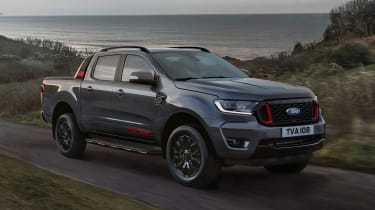 Ford has launched a limited edition version of the Ranger pick-up truck in the UK. Called the Ford Ranger Thunder, it adds a brace of cosmetic upgrades to the range-topping Wildtrak model. Production will be limited to just 1,400 units, with each example being priced from £32,965 excluding VAT. First deliveries are expected to arrive towards the end of summer this year.

Inside, buyers get ebony leather upholstery with the Thunder logo embroidered into the front backrests, as well as contrasting red stitching across all the cabin trim. Black floor mats are also included as standard, along with an eight-inch infotainment system and a set of unique tread plates, which are backlit in red.

As an optional extra, buyers can spec a powder-coated Mountain Top roller cover for the load bed. The system also comes with a divider, which allows owners to split the bed into two smaller sections – which prevents items from rolling around the bed.

It’s powered by Ford’s twin-turbocharged 2.0-litre four-cylinder EcoBlue diesel engine, which develops 210bhp and 500Nm of torque. Like the standard Ranger, power is sent to all four wheels via a 10-speed automatic gearbox – and Ford says the powertrain will deliver WLTP fuel economy figures of 31.0mpg and emissions ratings of 239g/km of CO2.

What do you make of the limited edition Ford Ranger Thunder? Let us know in the comments section below… 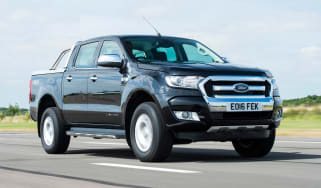 The Ford Ranger appeals to business and lifestyle users, but it’s not the most economical pick-up
Visit New Ford Ranger Raptor 2019 review 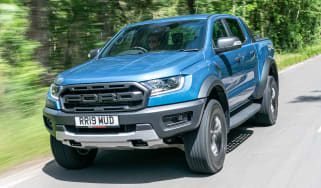 The new Ford Ranger Raptor is like no other pick-up currently on sale in the UK, but does that mean it's worth the near £50k asking price?