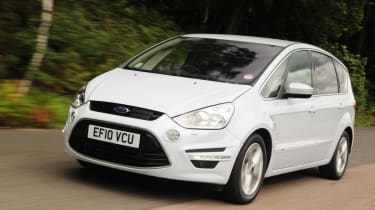 The Ford S-MAX is nearly a decade old and due to be replaced next year by an all-new model. Yet despite its advancing years, the current car is still one of the best MPVs money can buy. It doesn’t have the sliding side doors of the SEAT Alhambra or the cutting edge kit found in the Citroen Grand C4 Picasso, but it still has plenty to offer family car buyers.

A facelift in 2009 helped sharpen the already rakish looks, while keen drivers will appreciate the Ford’s engaging handling and fine ride. There’s also a wide engine line-up, too, including the manufacturer’s punchy EcoBoost petrol engines and efficient TDCi diesels.

There’s three trim levels to choose from – Zetec, Titanium and Titanium X Sport – and all are well equipped. For instance, all models get climate control, parking sensors and alloy wheels, while the Titanium adds cruise control and DAB radio and LED daylight running lights. Go for the Titanium X Sport flagship and you’ll be treated to leather and Alcantara trim for the seats, a panoramic glass roof, bi-xenon headlamps and a sporty bodykit.

It’s only inside where the S-MAX is starting to show its age. The dated dashboard design is carried over from the Mondeo, while the materials feels a little cheap compared to rivals from SEAT, VW and Citroen. And while the cabin is roomy, the seats in the third row are a little cramped for adults – families you frequently travel seven-up will find the bigger but mechanically identical Ford Galaxy a more comfortable choice.

The S-MAX also suffers from relatively high running costs. Even the cleanest diesel emits a hefty 139g/km, while the range-topping 237bhp 2.0-litre petrol model claims just 34mpg. It’s not all bad news though, because with a new model just around the corner you should be able to secure a healthy discount from dealers eager to clear stocks of the current car.

The S-MAX is great to drive, and from behind the wheel you would be hard-pressed to know you were in a tall people carrier. It attacks corners with gusto, boasts well-weighted steering and resists body roll, while the firm but compliant ride is also great at soaking up nasty bumps – your family will never suspect you’re having so much fun. This is especially true on Titanium Sport models fitted with the pricy but very effective £1,750 adaptive dampers. 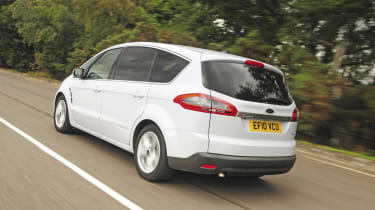 Our pick of the range is the gutsy 2.0 TDCi diesel engine in 138bhp Zetec trim – the 113bhp 1.6-litre version feels a bit underpowered and is no more efficient, while the 161bhp only comes in Titanium trim and costs almost £2,500 more. The flagship 200bhp and 237bhp 2.0-litre EcoBoost petrol is a fast and surprisingly efficient replacement for the thirsty but characterful 2.5-litre five-cylinder model, but both versions are expensive to buy.

The Powershift automatic gearbox is quick and smooth, but costs an extra £1,000 across the line-up and has a big impact on fuel economy and emissions. Happily, the standard fit six-speed manual has an easy, positive action and is mated to a light and progressive clutch pedal.

The S-MAX is a very big car and, as such, is never going to be cheap to run. That said the 2.0-litre EcoBoost petrol version isn’t as thirsty as you might expect, with official figures of 34.9mpg and CO2 emissions of 189g/km. It’s also smooth and quick, but does have a higher insurance group rating then the diesels.

All of the 2.0 TDCi engines, regardless of power, have the same economy and emissions figures - 52.3mpg and 139g/km. However, if you opt for the Powershift automatic gearbox, the mpg figure drops to 47.1 and the emissions rise to 159g/km, which makes it much more expensive to tax.

The 113bhp 1.6-litre TDCi is best avoided, as it struggles with the S-MAX’s hefty kerbweight and emits exactly the same 139g/km CO2 as the punchier 2.0-litre TDCi units.

As for other running costs, the S-MAX is a large car and owners have reported heavy tyre wear, particularly on the front wheels. Service intervals are 12,500 miles for every model, while the 650-strong dealer network means there’ll be a Ford workshop near you to fix any problems.

Ford also offers a pre-paid servicing plan that covers two years’ worth of maintenance for £390, or three years for £690. It’s not as cost effective as plans from VW or BMW, but it does allow you to budget for maintenance costs.

Although the S-MAX is starting to show its age, a facelift in 2009 helped keep the sleek Ford looking sharp. It’s more stylish than a VW Sharan or Renault Grand Scenic, and sportier than the larger Galaxy, yet the rakish shape doesn’t come at the expense of practicality. It’s a tactic that helps it hide its bulky dimensions well, especially on the top of the range Titanium Sport, which gets a racy looking bodykit, lowered sports suspension and 18-inch alloy wheels.

Buyers looking for the ultimate in gadgets and gizmos should look to the Titanium X Sport, which are kitted out with part-leather seats, a panoramic sunroof and bi-xenon lights. Titanium models are also available with a number of upgrades, including a £1,400 touchscreen sat-nav, £450 heated and cool front seats, £800 adaptive cruise control and £425 keyless entry. However, many of these items are fitted as standard to cheaper rivals such as the Citroen C4 Picasso.

Elsewhere, interior all feels well made and it logically laid out, but the design is a little dated and some of the materials feel a little low rent.

As you would expect from a full-sized MPV, the S-MAX is a very practical car. With all seven seats in place, the boot measures in at 285 litres - which is about the same as most superminis. Fold all the seats flat and the available space increases to a van-like 2,000 litres. 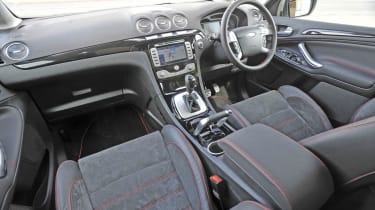 The rearmost seats are only really suitable for children, however, which mean that it’s likely that most of the time these will be folded flat to allow for more boot space. Doing so is a doddle, thanks to some easy-to-pull toggles, and the seats then sit flush with the floor. There’s plenty of head and legroom in the middle row seats, plus they also slide back and forth to either increase legroom or boot space depending on your needs.

The interior is packed with useful cubbies, including places to stash things like your mobile phone or maps, as well as overhead storage bins. As you’d expect, the combination of a high seating position slim A-pillars mean you get a commanding view of the road, while the seats and steering wheel benefit from a wide range of adjustment, meaning its easy to get comfortable.

The S-MAX has been around for a while now, so it’s no surprise that older examples have started to give their owners trouble. As a result the Ford finished in a disappointing 116th place overall in our 2014 Driver Power satisfaction survey.

As you’d expect, buyers slated the car’s poor reliability record and lacklustre build quality. Still, it’s worth bearing in mind that brand new models feel very robustly constructed, while any S-MAX faults should have been ironed out by now. And while there have been a variety of recalls, for faults including problems with the heated screens and brakes, all should have been fixed by now.

As for safety, the S-MAX has a full five-star Euro NCAP rating for adult occupant protection and four stars for child occupant. It comes loaded with airbags, including front and side airbags for the two front seats, along with window airbags for the front two rows. There's also a knee airbag for the driver. Traction and stability control are also fitted as standard, as well as Isofix child-seat fixings.

There’s also the option to upgrade the safety kit, with options such as the £625 blind spot monitoring and lane departure warning pack. And on Titanium models you can add adaptive cruise control and forward collision alert for £800.