Which is faster around the Auto Express test track, the Mercedes Sprinter or the Ford Transit? 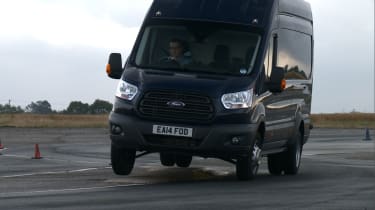 There's a huge choice when it comes to the new Transit. It's available with front wheel drive and rear wheel drive, with various wheelbases and different body heights. We test the rear wheel drive 470L4H3 version in the base trim. Powered by a 155bhp 2.2 TDCi diesel engine, it has 385NM of torque and a gross payload of 1,195kg. In the spec tested, this van will set you back just over £34,000.

The Mercedes Sprinter is one of the most famous vans in the world. Like the Transit, there's a huge choice. We test the Sprinter 313 Cdi BlueEfficency in long wheelbase trim, with a gross payload of 1,145kg. This van will set you back £33,000.

• Best panel vans on the market

We're going to start with the reigning Auto Express van of the year, the all new Transit - in twin rear wheel setup. The Transit's a real icon of the van world and Ford have always managed to inject a little of the chassis magic of their cars into their vans. The Transit is a genuinely pleasant vehicle to drive and, while driving around a circuit might seem like a crazy thing to do in a van, it highlights just how stable and safe and how much grip modern vans have got.

There's more steering feel in the Transit than a lot of cars. The gearbox is lovely, just like any Ford car gearbox, but what really blows you away is just how much grip it's got. You can really turn hard into the corners and you can feel the weight rolling onto the front wheels. It's very stable, despite the fact it weighs two tonnes and can carry up to a tonne of weight in the back.

Given how high the Transit is, the way it copes with changes of direction is really impressive. There's good feel through the brake pedal and it changes direction really well. Go a little bit too quick into a corner and you feel a little bit of stability control intervention.  It's really well balanced - it's very impressive that Ford has managed to engineer so much of its magic into the handling of this van.

The Transit lapped our test track in 1 minute 35.5 seconds, so how does the Mercedes compare? The Sprinter tested here is the full size model and has similar carrying capacity and carrying weight to the Transit. In pure performance terms its got quite a disadvantage in that its got 50NM less torque and 25bhp less than the Transit, and you can feel it initially. It doesn't pull as hard as the Transit on the straights.

It lurches into corners and the stability control is very good, but kicks in much earlier and much harder than the Transit. That kills the speed which, combined with the fact you've got a less powerful engine, makes it really critical to carry momentum in the Mercedes, to try and keep up with what we were doing in the Transit.

The Mercedes Sprinter lapped our test track in 1 minute 38.5 seconds. So, the Transit was three seconds a lap faster around our test track, and was genuinely pleasant to drive. But, given their size and weight, both these vans have incredible stability at speed and lots of grip.

So, the Sprinter isn't quite as sharp and enjoyable to drive as the Transit. It still changes direction relatively well, but you can feel the stability control pulling the performance back slightly. Both of these vans, though, show you just how safe and how stable modern vans are. It's pretty impressive just how well-engineered the best vans in the world are. 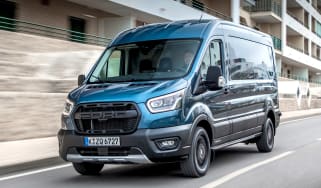 Beefed-up version of the Ford Transit can carry a payload of 2,383kg and support a gross vehicle weight of 5,000kg
Pricing confirmed for all-electric Mercedes eSprinter panel van