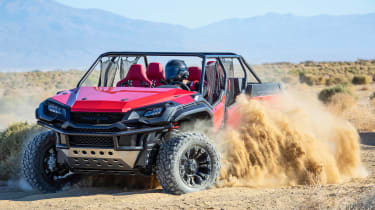 Described by Honda as “the ultimate open-air off-road adventure vehicle”, the pickup has been stripped of its bodywork in favour of an off-road buggy look inspired by the Honda Pioneer 1000 side-by-side utility vehicle.

Built on the platform of the Ridgeline, the ROAV gets Pioneer 1000 doors, a full roll cage, underbody protection, and off-road suspension and tyres. Inside, Honda has borrowed some seats from a Civic Type-R hot hatch, reskinning them with waterproof fabric, and added some chunky smartphone holders sitting on the otherwise empty dashboard.

While Honda has not announced what engine the ROAV uses, it’s more than likely that the 3.5-litre V6 from the donor Ridgeline remains in place.

Now here's our round-up of the best SUVs you can buy...