Honda is accelerating its electrification plans, with its entire European product range set to be electrified within six years 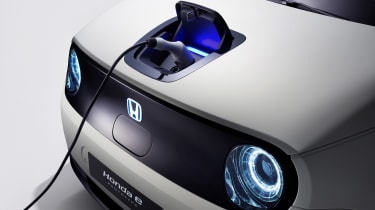 As well as revealing its all-electric e Prototype at the Geneva Motor Show, Honda has also announced plans to electrify its entire European product range by 2025. The Japanese company is accelerating its electrification plans, as it has previously announced that two-thirds of sales would be electrified by 2025. The new target is part of Honda's plans to have a global electric range by the year 2030.

Honda Motor Europe senior vice president Tom Gardner explained the change in target. "Since we made that first pledge in March 2017, the shift towards electrification has gathered pace considerably," he said. "Environmental challenges continue to drive demand for cleaner mobility. Technology marches on unrelenting and people are starting to shift their view of the car itself.”

As well as updating its cars with hybrid and EV power, Honda is teaming up with new partners to provide new charging and infrastructure solutions for EV users. The first of these is Moxia, a company that specialises in energy management, which will allow EV drivers to distribute electrical energy from their vehicles to and from the energy grid.

Honda is also joining forces with Ubitricity, a company that develops innovative charging solutions, such as public EV charging from lampposts and other existing street power sources designed to make recharging easier.

Gardner added: “This is a significant move for Honda, our intention is to deliver industry-leading innovation by launching energy services... to create additional value for power system operators and EV customers alike.”

The next steps for Honda in its 2025 all-EV target is to launch the production version of e Prototype later this year, while also working with its new partners on testing its new energy systems in London and in Honda's R&D home in Offenback, Germany.

Welcome to our Geneva Motor Show hub page, scroll down for all our Geneva content...
Honda axes diesel power in the UK