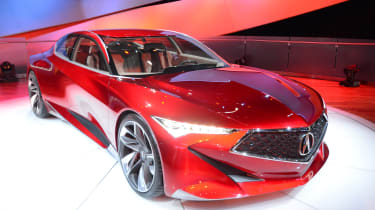 Honda's premium brand Acura has revealed a new concept car at the 2016 Detroit Motor Show. It's called the Precision Concept, and previews the brand's future design direction - but don't expect to see it on a UK model as Acura doesn't sell cars here.

The concept takes the form of a large coupe, with a low and wide stance, a long bonnet and swooping roofline. The LED headlights and tail lights, combined with a large black grille, give the car a mean look at either end - and the huge alloy wheels give the it some serious attitude when viewed in profile too. 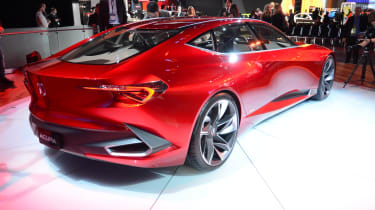 There's no B-pillar on the Precision Concept, and the rear suicide doors open outwards - like a Mazda RX-8. Inside there's a typical concept car interior, with a minimalist dashboard, sharp-looking seats and lots of leather around the cabin.

There's a large central screen with a 'floating' touch pad that forms part of the car's human-machine interface - and that's bolstered by a system that works out who is in the car and sets maps, music and other in-car settings to suit them. 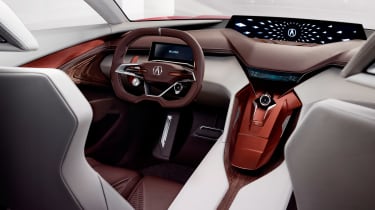 "The Acura Precision Concept is a design study model that literally will shape the direction of all future Acura products," said Dave Marek, Acura's creative director. "It's the leading edge of a renewed commitment to creating a powerful and very exciting direction for the next generation of Acura models."

In the US the Honda NSX is badged as an Acura, so it's possible that a future version of that car could get some of the features on this concept - but don't expect the Precision Concept to play much of a role in Honda's future UK efforts.