The Accord has unparalleled desirability, but practicality is compromised. 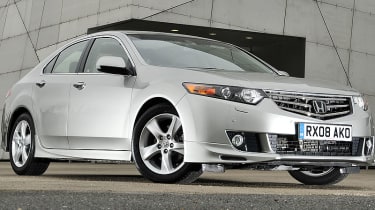 Driving The driving dynamics are superb. The front-wheel-drive setup is lively and the Accord proves entertaining and agile on twisty roads. It’s not as self-assured as a Ford Mondeo, moving around more as grip transfers between rear and front wheels, but the accurate steering makes it great fun. However, on seemingly smooth motorways, the suspension disappoints. It fails to settle and doesn’t iron out minor undulations that well. As for engines, there are two petrols, but the big seller will be the i-DTEC diesel. It is smooth and flexible, punchy if not thrilling, and is mated to one of the slickest six-speed gearboxes around.

Marketplace Honda accepts it hasn’t been all that daring with the current Accord. However, study it hard and you’ll notice that, while the angular lines of the old model remain, the overall stance and proportions are much more athletic. It’s wider and longer, but only the Renault Laguna is shorter. The range comprises ES and EX models, with GT versions of both also available (adding extra kit), and there is a choice of saloon or Tourer estate bodystyles. Sales of the 2.0-litre and 2.4-litre petrol engine will be dwarfed by those for the 2.2-litre i-DTEC, as the Honda takes on rivals including the Ford Mondeo, Vauxhall Insignia, Mazda 6, Citroen C5 and – if the company meets its premium aspirations, cheaper versions of the Audi A4, BMW 3-Series and Mercedes C-Class.

Owning Button-heavy the dash may be, but it’s all clearly labelled and logically presented. Quality is excellent, while attention to detail is a revelation. The dash has floating dials similar to those in a Mercedes, and there’s a useful (if prominent) gearchange indicator. Up front, there are sumptuous, shoulder-supporting seats, but while headroom in the rear is generous, there’s limited leg and footroom. The rear squab is sculpted for only two passengers, so sitting in the middle isn’t comfortable for adults. The boot is also miserly, and has an odd shape. What’s more, it is unlike Honda to leave bare medal in the load area. Retained values are good, though, and the diesel engine is impressively economical – it averaged 43.9mpg on our varied test route.