Sporty-looking Honda Civic Coupe unveiled in Los Angeles, but it won't be coming to the UK 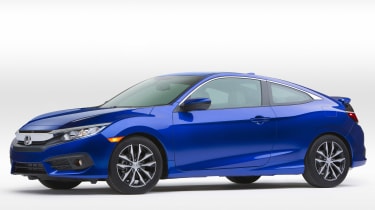 The new Honda Civic is set to arrive in the UK in 2017, available as before in hatchback and estate guises. The US, however – typically a far bigger market for saloons (or 'sedans') – will be able to get a saloon version of the Civic as well as this new Honda Civic Coupe.

While it's unlikely to make its way over here, the Civic Coupe does give British buyers a good idea of what's coming with the next-generation hatchback model. It's also been confirmed that the new car will be built at Honda's plant in Swindon, as part of a £200million investment.

The Coupe is based on the same platform as the other cars, but takes its inspiration from the concept car shown at the New York Motor Show earlier this year. The Civic Coupe will be available in the US from March 2016. 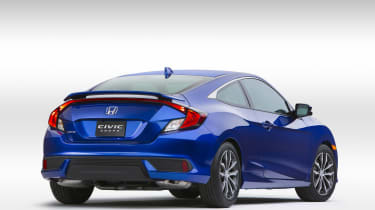 The Civic Coupe features a bold grille, in line with those on the recent Jazz supermini and HR-V crossover. The sloping roofline and distinctive rear lights complete the futuristic look and mean the new Civic should represent a big improvement over the slightly awkward-looking current car.

As it's for the US market, the Civic Coupe won't feature a diesel engine, so duties are handed to a 2.0-litre i-VTEC engine, as well as a higher-powered turbocharged 1.5-litre unit. 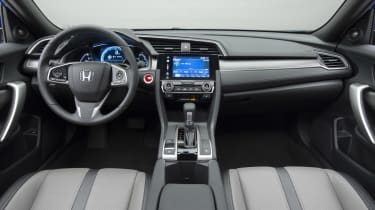 The interior of the Honda Civic Coupe should reflect well on the next-generation hatchback and saloon models – featuring soft-touch plastics and a more intuitive layout. It will be packed with kit, too, including the Android-based touchscreen infotainment system, auto lights, LED daytime running lights and climate control as standard.

Keep an eye on our coverage of the 2015 LA Motor Show for more details on this car as it's officially unveiled...