Recent facelift has improved the CR-V's looks, but design inside and out is still safe rather than exciting 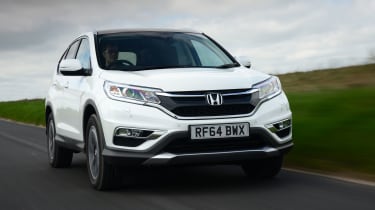 The previous-generation Honda CR-V looked a little awkward from some angles, but the latest version has a cohesive, no-nonsense shape. Even so, compared to rivals such as the Nissan Qashqai and Mazda CX-5, the car can appear a little slab-sided and bland.

Wraparound headlights and a grille featuring three prominent chrome bars contribute to a more aggressive front end than before. Slight changes were made in early 2015, when the car received a light update to the front and rear, as well as tweaked suspension, steering and gearbox components. The overall design alterations add up to a more attractive car, even if we wouldn’t exactly call it striking.

The colour palette for the CR-V is heavy on the monochrome, with nine shades offered. Of those, four are ‘colours’, with two blues, a deep brown and vivid red all available for the more daring buyer. Customers also have one 17-inch, one 18-inch and four 19-inch alloy wheel designs to choose from, while a cost option Aero Pack is available to beef up the car’s appearance. 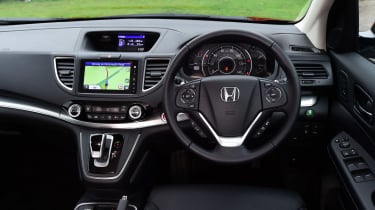 Inside, the dash in the CR-V is less button-heavy than in other models in the Honda range, and the plastics used feel solid and robust. However, the trade-off for this button-free design is that you get a cheap-looking touchscreen infotainment system slotted into the dash.

While it isn’t the most exciting interior layout, you get a sense that it will cope easily with the demands of family life. The only other major niggle is that the computer displays – housed above the sat-nav and in the speedometer – look a bit blocky compared to more recent rivals.

Stepping up to SE Plus will cost you more than £2,000 extra over the S, but it does bring a reversing camera and a leather-wrapped steering wheel, among other items, as well as Honda Connect. All engines and drivetrains are available here. Again, you can upgrade to an SE Plus Navi for Honda Connect.

Where it’s an option, four-wheel drive will add over £1,000 to the bill, while the automatic gearbox will set you back around £1,800 over the standard six-speed manual.

While Honda Connect, with its seven-inch touchscreen, features as an option on the S and SE models, you have to step up to an SR to get the Garmin sat-nav included as standard. Adding navigation to an SE model will cost over £1,000. 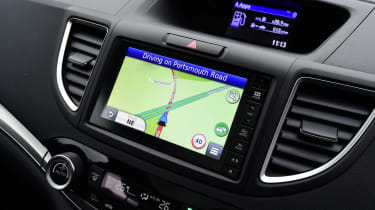 All cars come with DAB, a CD player, USB ports with MP3 connectivity and Bluetooth as standard, but there are varying levels of sound system. The S makes do with four speakers, while the SE is uprated to six speakers. Fitted as standard to the SR is an eight-speaker, 320-watt high-power audio system, and this is also carried over to the EX model.