We try out a prototype of the new-look Honda Jazz Hybrid. Production Jazz release date spring 2014 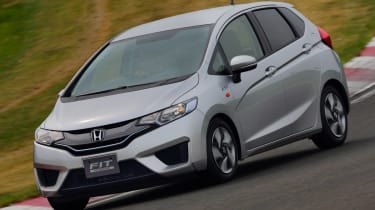 The Jazz’s new look won’t be to everyone’s taste, but few people will criticise it once behind the wheel. It steers, rides and handles better than ever, and the new dual-clutch box is a big step up from the noisy CVT. The superb claimed economy will make this Hybrid cheap to run, and the interior is bigger than before. Let’s just hope quality gets a boost.

Since its launch in 2001, the Honda Jazz hasn’t been changed drastically. But that’s about to change for 2014 with the third-generation Jazz, which benefits from a dramatic new look, an increase in dimensions and the addition to the range of a hybrid version.

We got an exclusive chance to try a prototype of the new Jazz (called the Fit in Japan) months ahead of its official debut. Honda is pinning its hopes largely on the car’s revamped styling, which could prove divisive. It looks better in the flesh than in photos, though, with a wide new front end taken from the FCX Clarity fuel cell car, as well as a set of tall tail-lights.

The challenge for the designers was to create styling that looked fresh and provided stronger road presence, but also maintained the previous model’s practicality. The wheelbase has in fact grown by around 50mm, but Honda has yet to reveal the exact figure.

On our drive, we did a few test track laps in the 1.5-litre four-cylinder hybrid with a new dual-clutch box, plus the 1.3 petrol with a CVT. Both engines now come with twin cams for better throttle response, while the suspension has been drastically revised to improve cornering and high-speed stability.

The new Jazz was heavily benchmarked against the current Volkswagen Polo and tested extensively in Germany. On the road, these revisions are immediately obvious. You sit marginally lower than before, and you can feel the car’s improved stability from the off. The Jazz also feels bigger and sturdier than its predecessor, but turns in eagerly with virtually no understeer and plenty of feedback through the wheel. There’s not much body roll for such a high-sided car, and the tyres grip well in tight corners.

A diesel will be offered in Europe, but as before the hybrid will be the flagship, combining a 1.5-litre petrol engine, electric motor and all-new intelligent dual-clutch box. This generates plenty of power – with 133bhp and 170Nm of torque – and has a claimed economy figure of approximately 85mpg, while sub-90g/km CO2 emissions make it a match for the diesel-powered Ford Fiesta ECOnetic.

The seven-speed box gives quick changes and allows more than adequate acceleration, and as you press on, a surprisingly sporty exhaust note fills the cabin. However, Honda appears to have thrown most of its budget at getting the handling and ride right. This means that, in the prototype at least, interior design and quality have suffered. So while the dash is simple and functional, it’s not in the same class as the Polo’s for materials, trim and build – although Honda claims that things will be much improved by the time the car arrives in the UK next spring.