It all started as a one-off anniversary celebration for 50 golden years of Honda. But the original S2000 was never the perfect present. That is why the car has been tweaked every year since it was launched in 1998, despite the low production numbers. 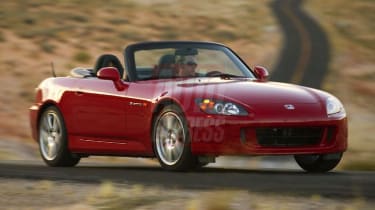 Upping the engine size has had a dramatic effect on the S2000's character. More responsive at low revs and better behaved at the limit, it's a far easier car to drive than the 2.0-litre machine. Sadly, though, it's unlikely to come here, so UK drivers will have to make do with the new looks alone.

It all started as a one-off anniversary celebration for 50 golden years of Honda. But the original S2000 was never the perfect present. That is why the car has been tweaked every year since it was launched in 1998, despite the low production numbers.

Now, for 2004, the model gets its most radical revision yet. With a larger engine, modified suspension, fresh body detailing and an even better six-speed box, this S2000 is virtually brand new - and Auto Express has driven it first.

The results are startling. Just a moment behind the wheel convinces you that this is the car Honda's engineers always intended the S2000 to be. That said, the cockpit is still as tight as a pair of drainpipe jeans, but ergonomically, it remains one of the best around.

After the snug leather interior, the first thing you notice is that the tacho red line has fallen from 9,000rpm to a more sedate 8,200rpm. Only when you head to the test track do you see why.

It's when you reach 4,000rpm that you notice the extra poke, and as you pass 6,000rpm, the VTEC variable valve timing system switches the engine to warp drive. True, you still have to work it hard, but that just adds to the thrill of this car. The six-speed gearbox is now closer to perfection. Ratios are longer, while the synchromesh has been uprated to improve shift quality. The result is a more precise, positive gearchange that goes exactly where you want it to.

The other area of improvement is the steering and suspension package. Honda's engineers have sharpened the steering and stiffened the front end. The rear ride height is also lower and the springs slightly softer. So gone is the inherent tendency for snap oversteer at the limit. It all means the S2000 is great fun to drive, better than even the brilliant Porsche Boxster.

But it's not all good news, as Honda has no plans to import this less frantic S2000. While UK cars will get the styling upgrades early in 2004, there'll be no new engine or suspension tweaks. Given the 2.2's promise, that's a shame.