Want a roadster that’s a good everyday car and great fun on a track, too? Look no further... 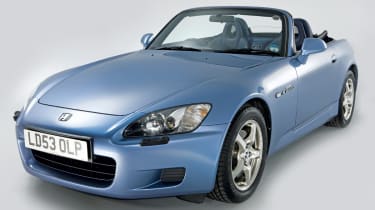 If you’re after a stylish, fun roadster, but you want great reliability, the S2000 is the drop-top for you. It’s a regular in the top 10 of Auto Express’s annual owner satisfaction survey Driver Power, plus surprisingly inexpensive to run.

But the key reason for picking an S2000 is its ability: the Honda has entertaining road manners, thanks to its rear-wheel drive and rev-happy VTEC engine, and the brakes are superb, too. Here’s our guide to buying used.

HistoryThe S2000 debuted in 1999, and from October 2000 there was a hard-top available, while a year later silver switchgear was added. In March 2002, a glass rear screen was made standard and the GT arrived, with an aluminium, removable hard-top. Suspension tweaks, new wheels and fresh colour options arrived in February 2008.

What to look forThe key thing to remember is the newer the car, the more fun you’ll have. The S2000 has been constantly refined and improved. Models from 2008 are best, but unless you’re a hard driver you probably won’t fully appreciate the changes. Remember, too, that the Honda prefers costly super-unleaded.

AlternativesRoadsters don’t come much more affordable than Mazda’s MX-5, which is great fun, but not as fast as the S2000. The Audi TT, BMW Z3/Z4 and Mercedes SLK turn up the pace, but they’re also more expensive. Even better to drive is the Porsche Boxster, but again it’s pricier to buy and will cost a lot more to keep on the road.

VerdictThe S2000 is so reliable, many are used as everyday cars. As a result, early examples can have massive mileages, but that shouldn’t put you off buying one, as the roadsters are extremely dependable. Plump for a pre-2001 model and you’ll have the benefit of avoiding potential tax hikes, too.

And if you need further proof at just how good the S2000 is to drive, it came second in the performance stakes in Driver Power – nearly a decade after launch!

Kerbed alloysTHE wheels are extremely easy to kerb and costly to replace, so check any potential buys have not been damaged through bad parking.

Rear screenThe plastic rear window can scratch on pre-Feb 2002 cars; on later roadsters, ensure the glass screen hasn’t been damaged when the roof has been folded down.

RoofCheck the hood fabric, and also that the roof goes up and down smoothly – especially on cars that have had the hard-top left on for long periods of time.

LubricantThe happy-to-rev Honda VTEC engine can really get through oil, and needs a diet of fully synthetic lubricant. Check the service history as well as the oil level.

RecallsFeb 2000: The seatbelt webbing was liable to get caught between the seat back and the roof cover on cars built throughout 2000.

For an in-depth buyer's guide on the Honda S2000 from Classic and Performance Car click here...