Some cars are ripe for tuning. Take any small Ford or the old Mini - such models are designed with frugal rather than high-performance engines and a chassis which can easily handle more power. 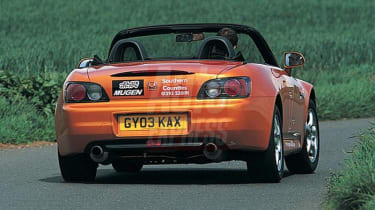 Mugen's tuning of the Honda S2000 has made the car's incredible engine truly astonishing. But many may find the VTEC unit a bit of a handful, and be tempted by the host of alternative rag-tops. Nevertheless, this beefed-up roadster is thrilling to drive and a realistic day-to-day car.

Some cars are ripe for tuning. Take any small Ford or the old Mini - such models are designed with frugal rather than high-performance engines and a chassis which can easily handle more power.

On the face of it, therefore, it seems that Honda's S2000 should be left well alone. After all, with 237bhp from its 2.0-litre unit, the car already has one of the most potent engines of its class. And its rear-wheel-drive chassis can challenge even experienced drivers.

But that hasn't stopped Japanese tuning specialist Mugen from tinkering under the bonnet. The outcome is the souped-up road-legal Mugen Power S2000, which is set to take on rivals as fearsome as Porsche's Boxster S.

Honda's VTEC technology already offers a staggering boost of power after 6,000rpm. This allows the engine to continue right up to an ear-bashing 9,000rpm, far above the levels of a conventional unit. Even in standard form, the S2000 covers 0-60mph in only 6.2 seconds and has a 150mph top speed.

Mugen, which appropriately translates to 'unlimited' in English, has fine-tuned this performance to maximise output and efficiency. As this is the firm that - until the end of last season - supplied power to the Jordan F1 team, it's fair to say it knows what it's doing.

A new exhaust manifold improves both power and torque at mid and high revs, while a carbon fibre air intake box saves weight and helps the engine to breathe more efficiently. At the rear, a larger but 10.8kg lighter titanium exhaust also aids the power hike, while creating a superb hum from the four-cylinder engine.

The result isn't a dramatic increase in peak power or torque, but more of both in the middle of the rev range, between 4,000 and 7,000rpm. No official performance figures have been released yet, but the engine is noticeably less flat-feeling in any gear. Pinned to the seat as the digital rev counter flashed green to red, we found it virtually impossible to separate grimace from grin as we put the S2000 through its paces at the test track.

Take a breather, though, and Mugen's monster is still a user-friendly rag-top. It will potter around town with a quiet burble, its generous boot full of shopping. Meanwhile, the cabin is very well laid out, and the power hood helps make the most of the sunshine.

But the drawbacks are still there, too. A lack of seat and steering adjustment means it's not easy for tall drivers to get comfortable, while the intrusion of the transmission tunnel into the footwell impedes entry to the car. The steering is still not perfect, either, but Honda's close-ratio six-speed gearbox is unchanged, providing one of the most satisfying and slick shifts around. Even though Honda won't officially import the Mugen S2000, it will let its dealers ship in the tuning parts from Japan, and still honour the full three-year 90,000-mile manufacturer's warranty on the uprated motors.

Our car was supplied and converted by Southern Counties Honda, West Sussex. Prices start from £29,710 - nearly £4,000 more than a standard car - and you can spend even more, with bodykit options including new alloys, front and rear spoilers and side skirts.

The Mugen S2000 is an extreme and pricey proposition that will have its work cut out to beat the latest competition. But if you are looking for a more entertaining alternative to a German roadster, it could be playing your tune.