It may look the same, but Honda claim its S2000 is new and improved. 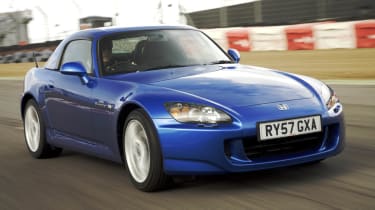 It’s third time lucky for Honda’s roadster. The brand has tweaked the suspension settings on the S2000 twice before, but the latest revisions make this the most sure-footed version yet. However, it’s showing its age. Fans love the unique engine, excellent gearbox and incredible reliability, but poor refinement and a cramped cabin still mean it’s an extrovert choice. At £28,600, it’s not cheap, either.

You've heard of the Invisible Man – now meet the invisible facelift! The revised Honda S2000 is out now, but you’ll have to really get under its skin to appreciate the changes.

Engineers have concentrated on improving the uncommunicative steering and edgy handling, so cosmetic alter­ations are kept to a minimum.

All that identifies the latest S2000 from the outside is a fresh set of five-spoke alloy wheels. Inside, the shape of the headrest has been redesigned to improve rollover protection, while you get a choice of three new trim colours – but that’s about it.

The ‘same again’ styling is no bad thing, because the S2000 is both smart and distinctive. The only trouble is, the cabin is beginning to appear dated. Digital instruments and quirky switchgear set the Honda apart from the competition, yet it’s cramped and unrefined. The simple fabric hood still has one of the fastest folding mech­anisms in the business, though, and the 2.0-litre VTEC engine thrives on revs just like before.

To tame the S2000’s wild side, the maker now fits Vehicle Stability Assist as standard, while the suspension has undergone wholesale changes. The new set-up is identical to that on the Japan-only Type S model, and boasts retuned dampers and uprated springs.

Honda has revamped the suspension twice before, as part of revisions in 2002 and 2004. And the good news is that the changes appear to have done the trick this time. The steering has more weight and it now inspires extra confidence. The rear end also feels more planted, and the stability system steps in if you get too carried away. As a result, drivers will be much happier giving the screaming engine a proper work-out and pushing hard in the roadster without wor­rying about it biting them back.

Thankfully, the rifle-bolt action of the six-speed manual gearbox hasn’t been harmed; it remains one of the best shifts on any car. The stubby lever is perfectly positioned, and changing ratios is an absolute delight.

However, you can’t help thinking that the modifications have all come a bit late for the S2000 – the two-seater will celebrate its ninth birthday later this year. There’s no doubt the facelift is a success, but the Honda looks expensive, and its raw appeal still makes it an acquired taste.