The Honda S2000 has always been schizophrenic. If you took last year's model on a test track, you'd think it was a well balanced, perfectly planted and super-secure sports car with one of the finest chassis around. 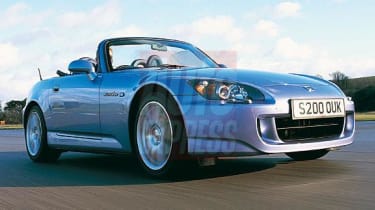 The S2000 has had some of its raw edges blunted without taking the sharpness away from the drive. It remains agile, with nervous on-the-limit handling, but now has a less jarring ride and better refinement. The steering isn't great, yet the engine and box are highly rewarding. A desirable car - but still with only limited appeal.

The Honda S2000 has always been schizophrenic. If you took last year's model on a test track, you'd think it was a well balanced, perfectly planted and super-secure sports car with one of the finest chassis around. Squeeze the throttle too hard, though, and all hell would break loose. It would snap into oversteer, and only lightning-quick reactions could save you from an excursion into the undergrowth.

On the road, that made the S2000 a car for those who either never dared to approach the limits - or had serious skill. To enthusiasts, its lively temperament was the key to its appeal - presenting Honda with a conundrum. How could the roadster be easier to drive and live with, without alienating its loyal customers?

This is the answer - the first major facelift since the S2000 debuted in 1999. Visually, it's not significantly different. New three-lamp headlights and LED tail-lights are obvious, while more subtle modifications include deeper front and rear bumpers, twin oval-shaped exhaust pipes and stylish 17-inch wheels.

Inside, resculpted door panels give more elbow room, yet the cabin is still narrow and cramped. A new centre console storage tray, deeper door bins and a fresh digital clock complete the picture. But the biggest changes are under the skin, with a reworked chassis set-up incorporating stiffer front springs and dampers, and softer ones suspending the rear end.

The effect is to reduce movement from the back under hard cornering, and give a less bumpy ride. That makes the car more controllable, stable and forgiving on uneven roads. However, on greasy surfaces the rear is still eager to break away with little provocation.

According to Honda, changes to the steering rack give greater precision and response. But in practice, the steering still feels too light and vague for a 'proper' sports car. The throttle feel is vastly improved, though, despite the alterations being limited to a stiffer pedal and reduced travel. Instead of the previous S2000's on-off responses, which made it too easy to 'kangaroo' at low speeds in traffic, the S2000's power delivery is now significantly smoother.

The gearbox has also been looked at in a bid to make the car easier to drive. Extra strengthening improves refinement and there's a new clutch delay system which softens the gearshift by ensuring the engine's torque is delivered evenly. The result is a car that's noticeably quieter at speed.

One area that Honda's engineers have very sensibly left alone is the 240bhp VTEC powerplant. The engine is fantastic, only really coming alive at the top end of the rev range, and providing a great sound to match its urgent power delivery. The motor alone makes the S2000 a desirable offering, and the new refinements take away some of the car's twitchiness without ruining the driving experience.

But the Honda remains a handful in the wrong conditions, and although the facelift has increased its practicality, you must still make sacrifices if you use it on a regular basis. The fact remains that only the seriously committed enthusiast would consider the S2000 as an everyday proposition.