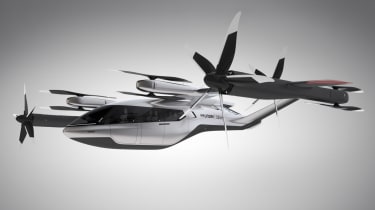 Hyundai has revealed two new concept vehicles at this year’s Consumer Electronics Show, offering very different takes on autonomous transport, but linked together by a ‘Hub’ base.

As well as showcasing a new take on personal transport, the flying S-A1 Personal Air Vehicle (PAV) concept is the product of a new collaboration between Hyundai and ride-hailing firm Uber. A small, electric, multi-rotor VTOL (vertical take-off and landing) aircraft, the S-A1 is designed with city trips in mind. As such, it’s been designed to be as quiet as possible, not just for passenger comfort but also to minimise noise pollution in city skies, while it’s also been envisioned with light-weight carbon composite construction.

The full-size S-A1 concept is key to the partnership between Hyundai and Uber, which aims to develop a future air-based ride hailing network. The ultimate goal of this collaboration is to allow Uber users to one day summon air vehicles like the S-A1 via their phones, as is already done with conventional Uber taxis. 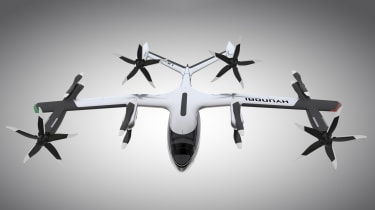 Hyundai claims that the five-seat S-A1 would be capable of cruising at 180mph, at a maximum altitude of 2,000 feet for trips up to 60 miles long, enabling inter-city travel. It’s not fully autonomous, but Hyundai says the need for a pilot could be phased out in the future.

The S-A1 docks at a ground-level Skyport called the Hub, which features a helipad placed atop a docking station for the road-based element of the concept.

For now, this new autonomous pod concept takes on the name of Purpose Built Vehicle (PBV), and its main purpose is to make ride-hailing a more personalised service.

The boxy electric pods are inspired by San Francisco cable cars, but they haven’t been designed solely for getting around the city. Hyundai says they can be used as mobile function rooms, for autonomous deliveries and as commercial spaces, with the electric PBVs being used as small pharmacies, hotel rooms and cafes, for example.

The bodies can be disassembled and customised at the PBV docking station located under the helipad at the Hub, and are adjustable in length from four to six metres, depending on how much space is needed. The interior space is completely modular and configurable on demand too.

What do you think of Hyundai's CES concept? Let us know your thoughts below...

A pre-production version of Hyundai’s retro-styled all-electric SUV has been spotted undergoing development at the Nurburgring
Visit How to drive an electric car: petrol vs EV driving styles