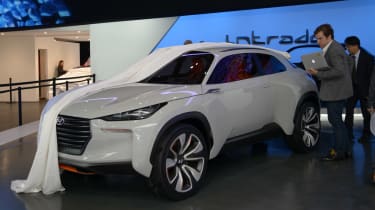 The designer who made Kias cool – Peter Schreyer – is now turning his talented hand to sister brand Hyundai. His first concept car for the marque – the Intrado – was launched at the Geneva Motor Show today.

AutoExpress got a sneak preview of the aerodynamic-looking fuel cell concept crossover this week and spoke exclusively with Schreyer about his vision for Hyundai.

Schreyer told us the concept was “the first stage in differentiating the two Korean brands more clearly. Many people say Hyundai is the more conservative brand of the two, but I don’t think that’s the right way. It’s not an old man’s car, it can be sporty too with its rally racing background and more.”

The concept – which Auto Express saw as a full-size clay model in Germany while the finishing touches were being made to the show car itself over in Italy – is a great-looking vehicle.

It features more focused, narrow front lights, a deeper and more three-dimensional grille and distinctive wheel arches which are partially detached from the front bumper and visually appear to frame the car’s front, with a little nod to the Aston Martin ONE-77, or perhaps a catamaran, in the process.   Perhaps more important than this new aesthetic direction is the revolutionary new chassis structure that underpins its svelte shape.

It features a patent-pending pliable soft woven carbon fibre tubing system that can be bent into more flexible shapes than conventional steel or carbon fibre and is filled with four slugs of resin to then make it hard and rigid (looking akin to a grey Battenberg cake in cross-section).

Crucially, Hyundai says the new approach should save considerable weight, cost and manufacturing complexity and could reduce the cost of future hi-tech production cars within a few years (notably on its second-generation of fuel cell vehicles).

Due to its high rigidity the clever chassis material also allows the designers to dispense with a B-pillar between the front and rear passenger seats to improve vehicle access.

Although the Intrado doesn’t point to one specific new Hyundai model, its styling will inspire the look of the firm’s new models from now on.

Welcome to our Geneva Motor Show hub page, scroll down for all our Geneva content...
New Hyundai RM20e revealed as testbed for future performance EVs