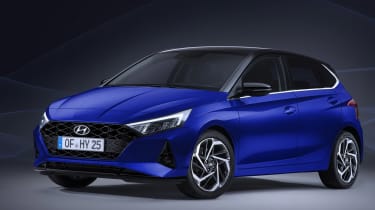 The all-new Hyundai i20 supermini has been unmasked earlier than intended as a set of what appear to be official images leaked online. The third-generation model features a sporty cosmetic overhaul, along with a host of chassis, powertrain and technology upgrades. The Korean firm’s latest Volkswagen Polo rival will make its debut at this year’s Geneva Motor Show, before going on sale in mid-2020.

As we can see from the leaked pictures, the new Hyundai i20 receives a fairly extensive exterior redesign, lifting a handful of styling features from its larger sibling, the i30. Up front, there’s a pair of aggressively styled air intakes, new angular LED headlamps and the most recent iteration of Hyundai’s “cascading grille” design, as seen on the latest Santa Fe SUV.

At the rear large light clusters are connected by a horozontal bar running below the hyundai badge and a subtle spoiler extends the roof line. Hyundai has retained its supermini’s compact proportions and practical five-door layout and fresh styling lines also feature down the car’s flanks.

The recently-released i10 city car sought to be the most tech laden car in its class, and Hyundai looks to be taking a similar approach with the i20. Inside, the new car will receive a pair of 10.25-inch screens, with one acting as a digital instrument binnacle and the other handling the car’s infotainment functions. A range of new driver assistance systems will also feature, including lane keeping assist, driver attention warning and autonomous emergency braking.

Like the old model, the new i20’s engine range will likely feature a 1.2-litre four-cylinder and a turbocharged 1.0-litre three-cylinder, each in a couple of states of tune. Buyers will also be offered the choice of a five-speed manual, a six-speed manual or a seven-speed dual-clutch automatic gearbox, depending on the engine.

We’ve already seen spy shots of a hot i20 N mule, too. The performance-focussed i20 N will give Hyundai a rival for the Ford Fiesta ST. It’ll likely be powered by a tuned version of the Korean firm’s 1.6-litre four-cylinder petrol, producing around 200bhp – enough to make it competitive with the 197bhp Fiesta ST, but not so much that it treads on the toes of Hyundai’s flagship hot hatch, the 247bhp i30 N.

What are your thoughts on the new Hyundai i20? Let us know in the comments section below…

Welcome to our Geneva Motor Show hub page, scroll down for all our Geneva content...
Visit Used Hyundai i20 review 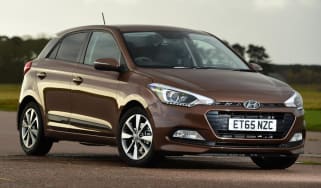