Confusion reigns with Hyundai's 4x4 range. The Korean maker introduced its first off-roader, the Santa Fe, three years ago. Then came the Terracan, and finally the Tucson. 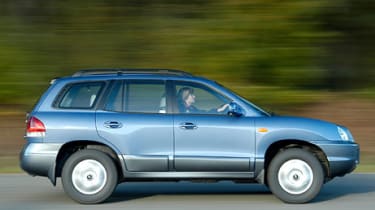 It's difficult to see the point of the Santa Fe now Hyundai has launched a smaller 4x4. It fits awkwardly in the range, as it's larger than many compact SUVs, yet smaller than most full-sized models. The driving experience is nothing special, but some buyers will be swayed by the car's impressive warranty and equipment.

Confusion reigns with Hyundai's 4x4 range. The Korean maker introduced its first off-roader, the Santa Fe, three years ago. Then came the Terracan, and finally the Tucson.

The problem is, all three are similar in price and size. This makes choosing which SUV to go for very difficult - especially when you consider the myriad of engine and trim level choices that overlap across the three line-ups.

But now, Hyundai is hoping to address the issue with a facelifted Santa Fe, which arrives in showrooms next month. The newcomer features bigger headlamps and a flatter nose, while the wheelarches are squarer and the lower body protection moulding less prominent. The external changes tidy up the car's appearance, distancing it from the Tucson and Terracan and spreading out the range in the process.

In theory, it's a great idea, but in practice the Santa Fe's styling is still far from conventional - it's a look you'll love or loathe. Furthermore, the new range will be much smaller than before; although that isn't as bad as it might sound.

GSI spec has been dropped to avoid overlap with the Tucson, and the 2.4-litre petrol engine has also fallen by the wayside. That leaves only two powerplants and one trim level, while prices have risen by £1,000 in order to position the Santa Fe slightly higher in the market than its smaller sibling.

But this increase doesn't come without a sweetener. The CDX trim carried over from the previous model has been improved, and buyers now get cruise control, a front windscreen de-icer system, heated seats and mirrors, leather, six airbags and a trip computer, all of which were either absent or optional on the outgoing car. Hyundai says this kit is worth £2,250; the only question is whether buyers are willing to pay for it.

There's no arguing that the car is well equipped, though, and the Korean maker's five-year warranty is bound to prove a hit in this country.

Apart from the cosmetic enhancements and improved trim, the Santa Fe is little different to its predecessor from the driver's seat. The interior is better, with a new leather-bound steering wheel and gearknob, plus aluminium-finished rings around the dials. On the road, the Santa Fe is able, but not amazing. The 2.0-litre CRTD diesel engine doesn't offer much in the way of performance, but refinement is improved over the previous car, and it's a reasonably relaxing companion at motorway speeds.

The ride is no worse than average for this class, and the handling is tidy enough. But our biggest criticism is the steering - the Hyundai's wheel lacks feel at anything above town speeds, and while its lightness might be an advantage for squeezing into tight spaces, the car loses composure at pace.

Despite the price rise, the Santa Fe is still good value, but those quirky looks will be enough to put off many buyers.