Getting established in the SUV market isn't easy - just ask Hyundai! The firm already has three 4x4s in its line-up, but only the entry-level Tucson is capable of challenging for class honours. 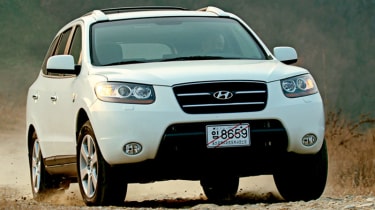 In its native Korea, Hyundai is regarded as a trend setter. The firm's badge isn't so cherished in the UK, but the all-new Santa Fe proves that style could become a selling point in Europe, too. A strong new diesel and a practical seven-seat interior should allow the Santa Fe to take on top-selling Japanese rivals for the first time.

Getting established in the SUV market isn't easy - just ask Hyundai! The firm already has three 4x4s in its line-up, but only the entry-level Tucson is capable of challenging for class honours.

That's a situation the all-new Santa Fe hopes to change. Designers have banished memories of the current bulbous and ungainly machine to the history books, and instead have created a distinctive looking five-door SUV.

Inside, the makeover is almost as striking, but although the cabin has a more upmarket feel, and for the first time seven seats, the plastics still appear cheap. As with the Sonata saloon, the Santa Fe has a prominent centre console, but the layout has been brought up-to-date.

While a 2.7-litre V6 petrol variant will be available, the 151bhp 2.2-litre diesel driven here should account for most sales in the UK. Replacing the outgoing 2.0-litre oil-burner, the new unit delivers an extra 36bhp and an impressive 343Nm of torque.

From a standstill, the diesel engine is a little unresponsive, but once on the move it provides smooth acceleration whether mated to manual or automatic gearboxes. A part-time four-wheel-drive transmission system also ensures the Santa Fe is never short of traction, as it feeds power to the rear wheels when the front tyres slip.

Engineers have fitted stiffer suspension to the new model, and as a result the Santa Fe doesn't offer as smooth a ride as the class-leaders. The benefit comes in the corners, where body roll is more controlled and handling is impressive in all but the tightest of bends. Safety hasn't been forgotten either, with six airbags, EBS, ABS, traction control and active headrests all available. Prices are expected to rise over the current version, with the line-up likely to start at around £21,000.

We'll have to wait until we drive the Santa Fe in European specification to see if Hyundai has got a potential class-leader in its ranks, but the early impressions are encouraging.