Special-edition Korean SUV is packed with kit – but is it worth the extra cash? 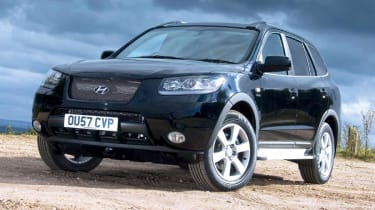 Special editions can frequently offer something for nothing – but to our eyes the Santa Fe Limited doesn’t quite cut it. It certainly looks different, but we think the subtle style of the standard car is far more appealing. In fact, the only real benefits of the Limited package are the rear parking sensors. That aside, the Santa Fe remains a great 4x4, with lots of space, kit and a fine diesel engine. And the CDX-trimmed manual version, rather than the auto tested here, is still an excellent family SUV.

Ushering in a new dawn for Hyundai last year, the Santa Fe is one of the firm’s most complete models. Named the Best Recreational 4x4 in our New Car Honours in 2006, it forced many prestige SUV buyers to consider the Korean brand for the first time.

A limited-edition version is now available, offering more equipment, an aggressive look and even wider appeal. Priced from £23,795, it’s only £118 more expensive than the CDX model on which it’s based.

Called the Santa Fe Limited, 400 examples of the special-edition model will be produced. Each gets a host of visual updates which are aimed at giving the SUV a more distinctive look, including a new ‘Sports’ mesh grille, silver running boards and black plastic wheelarch trims.

The rear windows are tinted with privacy glass and there are reversing sensors to assist parking. New Limited badges and a choice of four exterior colours – Ebony Black seen here, Sleek Silver, Gun Metal or Black Pearl – complete the changes.

So, are they worth the extra? Well, given its size – the Santa Fe is about as big as Land Rover’s new Freelander – the reversing sensors are useful, as they’re a £150 option on the CDX. As for the other bells and whistles, we’d have to say ‘no’.

The side running boards, for example, reduce the Santa Fe’s ground clearance, and the tinted glass appears decidedly aftermarket. The silver mesh grille, meanwhile, looks like it’s been taken from a disposable barbecue. For the rest of the car, it’s business as usual.

There are some cheap plastics inside – the ‘wood’ trim on the centre console is dismal – but the interior is otherwise excellent. The driving position is commanding, there’s plenty of space in the back and everything feels well put together.

Plus, of course, there’s lots of standard equipment. Apart from the reversing sensors, the Limited is identically trimmed to the Santa Fe CDX, which means it gets cruise control, air-conditioning, leather seats (the driver’s is electric, too) and a seven-speaker CD stereo.

It also comes with a healthy list of off-road kit, which includes a four-wheel-drive system with lockable diffs and traction control. Our model’s 153bhp 2.2-litre diesel was smooth and punchy, even if it was mated to the expensive five-speed automatic, which is a £1,400 option.

The driving experience is comfortable, if devoid of fun. The verdict? If you want to stand out, the Limited will seem like good value for money. But if it was our cash, we would stick with the standard car.

Rival: Ford Kuga If you’re after a good-looking 4x4, then hang on for Ford’s Kuga. On sale early next year, the striking SUV promises to drive brilliantly on road and offer plenty of ability in rougher terrain. With excellent quality and a wide range of engines, it is a very appealing prospect.