Four years ago, there wasn't a single off-roader in the Hyundai range. But the Korean company certainly isn't one to miss a trick - and now there are three. 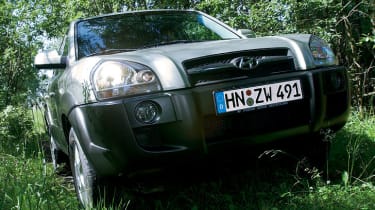 There's a lot to like about the Tucson. It's compact, agile and pleasant to drive, and offers all the image and practicality of an SUV without any of the negative aspects, such as a harsh ride or inflated running costs. However, there are areas in which Hyundai could improve the newcomer, notably the interior quality and the versatility of its engine range.

Four years ago, there wasn't a single off-roader in the Hyundai range. But the Korean company certainly isn't one to miss a trick - and now there are three.

Joining the established Santa Fe and utilitarian Terracan is the Tucson, due on sale next month. The newcomer is the firm's smallest 4x4, and aims to offer the style and equipment of a Land Rover Freelander at a more affordable price.

With Hyundai's trademark five-year warranty, it seems an attractive choice for those wanting the image and versatility of an SUV, but not the associated running costs. And this appeal extends further when you see it in the metal.

The Tucson is a good-looking car. It's fairly small for an SUV, and the Hyundai Coup� underpinnings mean it's wide and compact. It's also low, while the nose has hints of the Santa Fe - albeit in a more toned-down manner than its controversially styled bigger brother.

Things take a turn for the worse inside. Access to the cabin is excellent due to wide-opening doors and a low ride height, but the material quality is way behind European rivals'. The velour seats have an early Nineties look, the dash is brittle and the plastic around the centre console is cheap and shiny.

That's a shame, because visually it works well. The instruments are easyto read and logically laid out, while the driving position is excellent. The Tucson is practical, too. Its back seats fold flat at the pull of a lever and the rear window can be lifted independently of the tailgate for loading smaller items. Our 2.0-litre CRDi diesel model is tipped to account for more than half of UK sales, although 2.0-litre four-cylinder and 2.7 V6 petrol engines will also be offered. The common-rail diesel isn't the best on the market - it only has a miserly 111bhp - but it's fairly refined and engine noise isn't too intrusive at speed.

You won't buy the oil-burner for its pace, as it feels sluggish, and accelerating hard only increases the noise with no notable rise in speed. The V6 is livelier, although you pay heavily at the pumps. The Tucson acquits itself well on tarmac, its agile handling let down only by a woolly feel to the steering. What's more, the ride is excellent, with bumps soaked up as smoothly as in a saloon.

Off-tarmac, it's adequate enough. As with most rivals, the 4WD isn't permanent, so the front wheels pull it along in normal driving. Move into the rough stuff, and it automatically detects when there's a loss of grip, sending power to the back wheels. You can lock the 4WD in place at less than 18mph, but the low ground clearance discounts serious off-roading.

Still, the Tucson is an impressive car, and if it's priced to undercut rivals, Hyundai's third SUV could be the one that puts the company on the 4x4 map.