If the latest ad campaign is to be believed, then a Hyundai is a car first and a badge second. Exactly what that means is open to debate, but a much lesser point of contention is the Korean firm's burgeoning model range and its increasing quality. 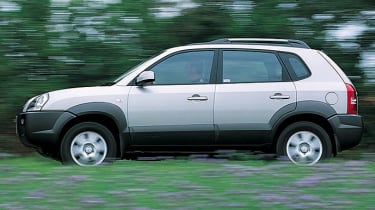 The Tucson is a fine effort from Hyundai. There's no denying it has its flaws, such as the coarse engine and four-speed auto box. But with its long warranty, decent equipment and practicality, it's particularly good for a family oriented buyer. Yet the V6 is not the best engine in the range - we'd plump for the diesel instead.

If the latest ad campaign is to be believed, then a Hyundai is a car first and a badge second. Exactly what that means is open to debate, but a much lesser point of contention is the Korean firm's burgeoning model range and its increasing quality. The latest offering is the Tuscon, which - along with the Santa Fe and Terracan - completes the maker's 4x4 line-up.

We have already driven the 2.0-litre diesel in left-hand-drive form, and now we've hit the road in a flagship UK-spec 2.7 V6. Its exhaust note isn't the most refined around, especially when you push hard, but the car can be hurried along at a fairly decent pace.

However, the fuel consumption suffers on the motorway - and given how much petrol we used on our drive, it wouldn't surprise us to see economy fall well below the claimed 28.2mpg.

The fact that the V6 is available only with a four-speed auto doesn't help; if you approach even slight inclines, it has to drop down to third, which means the revs rise dramatically and the coarse engine note becomes evident. Having said that, the shift is smooth and the box boasts a stepped manual function.

As with the powerplant, the ride is quite unrefined. It's fidgety over bumps, but is relatively comfortable in town and on A-roads. More impressive is the lack of body roll, which is surprising for such a tall car. Yet the interior is where the Tucson makes most sense. Not only is it generously equipped, with leather and climate control as standard, but the dash is well laid out. Even the cabin plastics, an area of criticism on previous Hyundai models, have an air of quality.

There's plenty of room in the back and the clever folding seats - similar to those in Vauxhall's Zafira - drop totally flat with a single pull on a lever, giving a massive boot area. Practical touches elsewhere include a large number of hooks in both the front and rear of the cabin, plus four 12-volt power points.

Finally, the model also benefits from Hyundai's five-year, unlimited-mileage warranty. As the company admits, the Tucson might not sport the most upmarket badge, but it does have a pretty good stab at being a competent 4x4.