Infiniti's future: can it ever beat BMW and Mercedes? 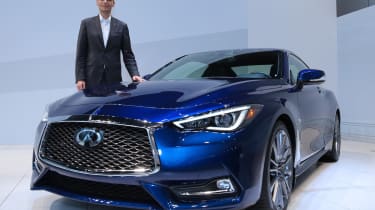 Launching a new car brand that captures the public imagination is no easy task, unless, of course, you’re Tesla. Just look at Infiniti, Nissan’s upmarket arm, for example. Despite some success in the US over the past 27 years, it has struggled for acceptance, and sales, here in Europe since its arrival in 2008.

Low brand awareness and a mediocre product range have meant it has struggled to attract buyers away from the German heavyweights, while its most obvious immediate rival, Lexus, has carved an advantage with its customer service, reliability record and, of late, daring design.

Infiniti, though, believes the time is now right to gain a significant foothold in the global premium market and invited Auto Express to Japan to tell us of its plans.

At an event entitled Discover Infiniti – an admission, perhaps, of its relatively low profile – execs were keen to look to the future while acknowledging mistakes have been made in recent years that have hindered its progress.

And, as you’d expect, getting the product line-up correct is key. Executive design director Alfonso Albaisa told us: “After the FX [Infiniti’s groundbreaking sporty SUV of 2003], we didn’t really build on the energy of it and there didn’t seem to be a consistency. So we have been concentrating on getting the portfolio consistent.”

According to chief creative officer Shiro Nakamura, “powerful elegance” is what Infiniti design should stand for and Albaisa’s recent and future models – notably the Q60 and forthcoming QX50 – execute this extremely successfully. What’s more, they are unmistakably Infiniti with clear design signatures such as the double arch grille, focused eye lamps and crescent cut C-pillar. It’s a strong look compared to some premium rivals, and eliminates any ‘confusion’ over the brand’s styling. 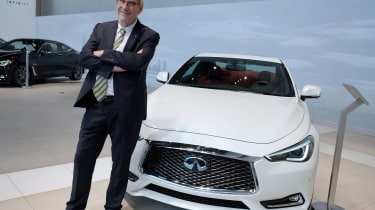 Ensuring there is substance to this style is important, too, and under the skin of its cars Infiniti is confident the engineering more than stands scrutiny. A groundbreaking new variable compression engine will be announced soon, while the brand is well placed to play a leading role in the autonomous driving revolution thanks to its direct adaptive steering system, pioneered on the Q50 (even if the set-up has failed to impress keen drivers).

The huge engineering capacity within the Renault Nissan Alliance means access to electric and hybrid tech is a given, while the new 400bhp twin-turbo V6 fitted to the Q50S and Q60S illustrates Infiniti is more than happy to embrace performance, too. When it comes to customer relations, Infiniti is even prepared to show its cuddly side, with president Roland Krueger constantly using a marketeer’s dream word – “humancentric” – to describe the brand’s outlook.

What does this mean, though? A quote from Alliance chief operating officer Carlos Ghosn sums it up: “Infiniti is not about doing what everyone else is doing. It is not about copying traditional forms of luxury. We will not try to be all things to all people, but everything to some people.” 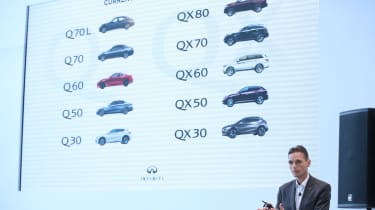 However, there’s a significant problem here, as Krueger points out. “We are working hard to work out who those people are.” In short, where are the buyers, especially in Europe? Although Infiniti recorded a rise in global sales in 2015, the need to raise awareness of the brand and sell more cars is obvious.

Worldwide, Infiniti shifted 215,250 models last year, which was a rise of 16 per cent over the previous 12 months and the first time it had exceeded the 200,000 mark. It also outsold Jaguar; the Brit brand found buyers for 83,896 cars. But Infiniti was still some way short of the 500,000 target Ghosn had previously earmarked for 2017.

To that end, the company has just completed an exhaustive research programme that it believes shows how great its potential market actually is. Its findings illustrated of those who intend to buy premium cars in the US (two million drivers) and China (2.2m), Infiniti can realistically count 20 and 17 per cent of these respectively as possible buyers.

But that’s Infiniti’s core market, the US, where of course the brand was launched, and China, which it is explicitly targeting from its deliberately chosen and strategically well placed global HQ nearby in Hong Kong. 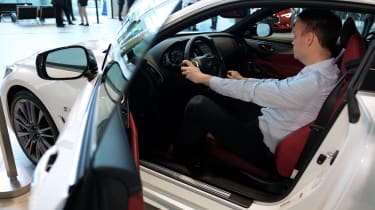 What about Europe, and specifically Britain, where the company is now building cars at Nissan’s Sunderland plant? Infiniti’s low profile and slow sales – 1,195 in 2015 – mean there is a lot of work to be done before it can be taken seriously here as the global brand it aspires to be.

Krueger is optimistic an upturn is on the way. He says: “We still have a great opportunity in Western Europe. We have just launched the Q30 and QX30 and the growth figures we see there we’ve identified as something we will work on.

“You need to have product on the road. When it is on the road, you will gain the awareness you need to grow the business. One leads to the other and that is what we are doing at the moment. But the awareness needs to improve. Definitely.”

Attracting more dealers and capitalising on the Q30 and QX30’s ‘Made In Britain’ status are two areas Krueger is looking to exploit, but of more importance in his eyes is that Infiniti feels comfortable in its own skin as it seeks to gain the credibility and acceptance it needs to grow.

“We now have a clear understanding of our tech and design,” he says. “There were a lot of questions, and I hope we have answered them.” Time will tell, but the future looks brighter than it has for some time.

Infiniti: the story so far

We look at the key moments in Infiniti’s history that have taken the brand to where it is today.

1985: Nissan forms its secret ‘Horizon Task Force’ in the US with the objective of creating a new premium brand. 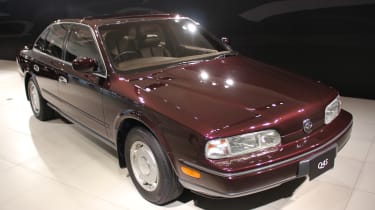 2003: The futuristic FX – the world’s first performance coupé SUV – makes its debut, five years ahead of the BMW X6. 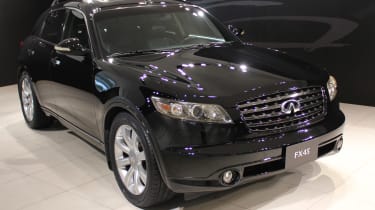 2015: Infiniti builds cars in Britain for the first time, with production of the Q30 starting at Nissan’s Sunderland plant. 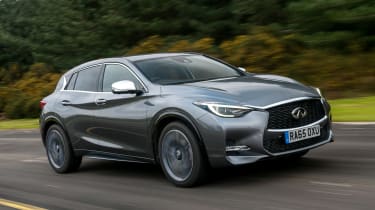 What do you think Infiniti should do in the future? Leave us a comment below!