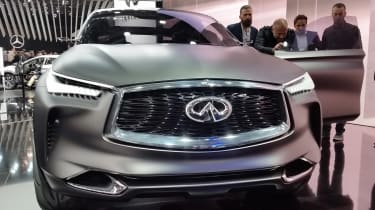 Infiniti has revealed an update to its QX Sport Inspiration concept car fro the Paris Motor Show 2016. As the brand looks to strengthen its presence in the mid-size SUV market with a more competitive rival to the BMW X3, this is our first hint at a new model in the range.

“The QX Sport Inspiration is a statement of intent, showcasing a demonstration of our capabilities in the mid-size SUV segment,” said Infiniti president Roland Krueger. An eventual production car would replace the ageing and unpopular QX50, which has been around since 2009.

A step over the sills makes getting in an out easier, and there’s 230mm of ground clearance, which Infiniti says helps emphasise the car’s off-roading ability. Contrasting that is a rear diffuser, which gives it more of a sporty edge. 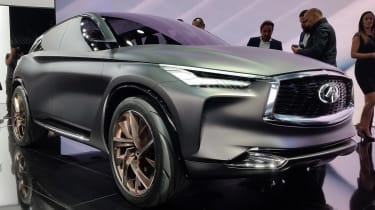 The interior is more unique and unlike anything you’ll find in Infiniti’s product portfolio today. A four-seat layout gives it less of a family car feel, while the two-tone black and white colour scheme is a bold design feature.

A digital display behind the steering wheel replaces the conventional instrument binnacles, while a flat-bottomed steering wheel and floating colour display has been added to the dash. All design features inside and out are rather restrained for a concept, so there is every possibility could make its way into showrooms largely unchanged. 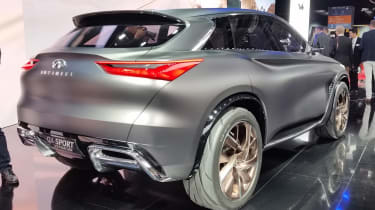 “The QX Sport Inspiration expresses power and purpose through what we describe as its ‘proportional clarity’, with an elegance that is uniquely Infiniti,” said Alfonso Albaisa, Infiniti Executive Design Director. “The exterior design will appeal to an artistic sensibility. It has a more flowing, natural aesthetic than that evident in traditional premium SUVs.”

There are no details of when we can expect a production model, but as well as the concept previewing a new mid-sized SUV some of the design details will go on to influence future Infiniti SUVs too.

What do you think of the QX Sport Inspiration? Leave us a comment below...