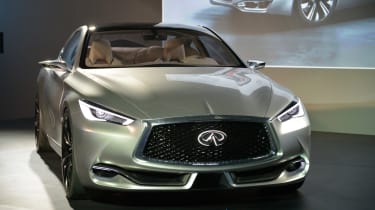 Infiniti has already given us our first glimpse of its two-door Q60 Concept that is leading the company’s appearance this week’s Detroit Motor Show, but now the brand has published more details of the concept and confirmed that we should expect a 2+2 coupe inspired by the Q60 next year.

From the rear, the Q60 Concept bears a striking resemblance to expensive machinery like the Mercedes S-Class Coupe. However, the Japanese 2+2 measures up against more mid-size metal such as the BMW 4 Series, Audi A5 Coupe and the Lexus RC. 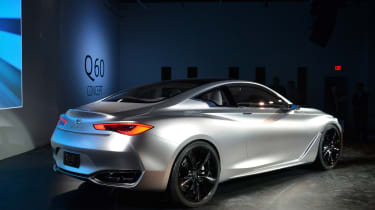 Move to the Q60’s side profile and the window’s distinctive kink, as used on the Q50 saloon, is present as is a strong character line. The aggressive-looking gills behind the rear wheels are inspired by those used on the hot Q50 Eau Rouge concept – a car that still hasn’t received the green light for production.

Under the bonnet lies a brand new twin-turbocharged 3.0-litre V6, first seen in the Q80 Inspiration at the Paris Motor Show. The 24-valve unit leads a range of new smaller and more efficient and more powerful engines set to appear in the next generation of Infiniti models starting this year. 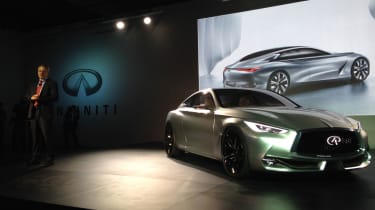 The much-criticised drive-by-wire steering system reappears for the concept but the car also debuts Infiniti’s new InTuition system – a fully-customisation system that memorises the car’s settings for four different drivers – from the driving position to the climate control settings.

The interior also features a had-stitched leather-wrapped instrument panel and door inserts and offers plenty of room in the rear thanks to sports front seats freeing up leg room in the back.

Infiniti launched the car at Detroit’s Museum of Contemporary Art and Design with Infiniti vice president for the Americas, Michael Bartsch, saying: “Over the past few years we have been saying we will bolster our brand with new models. A car inspired by this Q60 Concept will appear in 2016.”

The production car will replace the current Q60 that first appeared in the UK in 2009 and originally badged G37 Coupe. It's due in 2016.