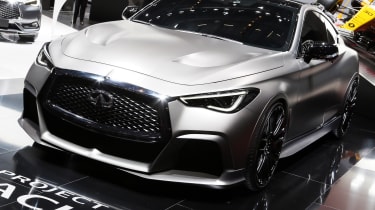 Infiniti has revealed its latest concept, the Q60 Project Black S, at the 2017 Geneva Motor Show. The new car is based on Infiniti’s two-door coupe and has been designed to highlight the technical partnership between Infiniti and the Renault Sport F1 team. To emphasize the connection Infiniti has given the Q60 some race car-style modifications and a much more aggressive look.

Infiniti, as part of the Renault-Nissan Alliance, has been working with Renault Sport F1 to help develop the energy recovery system (ERS) that can be found in this year’s Formula 1 car, the R.S. 17. The ERS collects energy during braking and from the heat of the exhausts. It’s then converted to electrical energy and stored in lithium-ion batteries before being used to spin the turbocharges turbine shaft or directly send drive to the transmission.

Although the engine in the Q60 Project Black S is currently unchanged from the production Q60, Infiniti intend to adapt the F1 car’s ERS package for the Black S and help boost its power by 25 per cent giving it 500bhp. 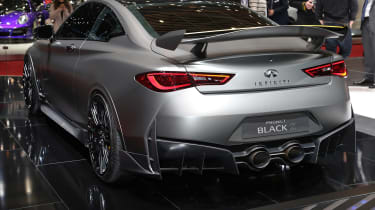 The standard Q60 is a very dignified and elegant car, and it isn’t the most obvious candidate to be given a more macho makeover. But when asked if it was difficult to reinterpreting the Q60’s sleek lines into an aggressive track-focussed machine, Matt Weaver, Infiniti’s European design director, responded ‘The Q60 has a strong image. So no, it was easy to contrast the elegance and the car takes it very naturally.’

Simply adding brutally functional race car-style wings and splitters wouldn’t suit its shape. Instead, each element has been designed with the same sensitivity as the original car. A philosophy Weaver describes as ‘hand of the artist, or hand of the craftsmen’.

This has resulted in very organics and delicate forms for the carbonfibre aero parts. Fortuitously, the new details on the Black S have similar shapes to the wings found on current F1 cars, and help solidify that connect between the Japanese manufacturer and the race team.

The more menacing look of the Black S is partly thanks to its grey matte finish and dark light clusters. But, as well as the stealthy colour scheme, the concept’s more aggressive appearance is thanks to a new front and rear bumpers, deeper sills, carbonfibre aerodynamic additions and wheel arch spats that cover a wider track. 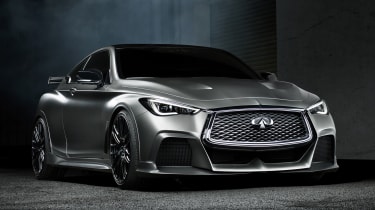 Despite significant changes the bumper makes to the front of the Q60, the large grille on the Black S remains the same as the production car. However, the bodywork either side has opened up to frame the central mouth and allow air to flow around it. More air would help improve cooling to the engine, essential should it ever get more power.

The Q60 Project Black S is just a concept, for now. And, even if it isn’t built, introduces us to the Black S badge and what it stands for; aggressive styling and increased performance.

What do you think of the Infiniti Q60 Project Black S concept? Let us know below...