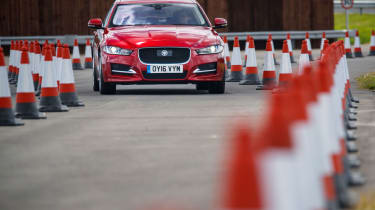 The first tests will involve vehicle-to-vehicle and vehicle-to-infrastructure communication tech that will allow cars to talk to each other by reading signs, gantries and traffic lights. Research will begin later this year on a new 41-mile route across motorways and urban roads around Coventry and Solihull in the West Midlands.

Head of research Tony Harper said: “Our connected and automated technology could help improve traffic flow, cut congestion and reduce the potential for accidents. We will also improve the driving experience, with drivers able to choose how much support and assistance they need.” 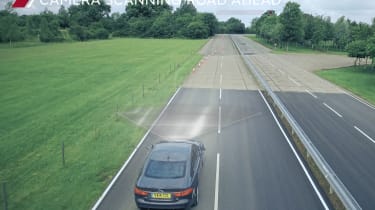 Features such as Roadwork Assist use forward cameras to generate a 3D view of the road ahead. It can recognise cones and barriers to identify a safe and unobstructed route down the road. It can even warn the driver of narrowing lanes, applying small amounts of steering assistance to help keep the car in the lane.

This tech will work alongside Co-operative Adaptive Cruise Control, whereby cars can travel in convoy with the lead car communicating acceleration and braking input to the cars behind. This allows vehicles to safely travel far closer than than they can currently, reacting instantly to any changes in speed. The 'connected cars' can also change lanes and exit junctions, synchronising their movements and maintaining safe distances from one another. Jaguar Land Rover says this will increase road capacity and prevent accidents.

JLR is also developing software titled Over the Horizon Warning, which uses radio signals to transmit data from car-to-car, with those ahead warning those behind of any impending danger over the horizon or around blind bends. Harper insisted that semi-autonomous technology could benefit the keener driver, too.

“Even when an enthusiastic driver is fully focussed on enjoying the thrill of the open road, the new technology we are creating will still be working in the background to help keep them safe,” he said. ”Imagine being able to receive a warning that there’s a hazard out of sight or around a blind bend.” 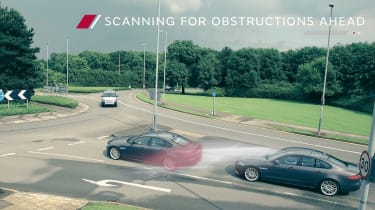 If the system spots a vehicle ahead that has slowed or stopped, it sends an audible and visual warning to the driver. Once the hazard is passed, normal driving can be resumed.

The final piece of tech is Emergency Vehicle Warning, which allows connected ambulances, police cars or fire engines to communicate with other vehicles on the road. By broadcasting their approach before the siren is audible the system gives members of the public a chance get out the way safely and conveniently.

How do you feel about self-driving cars being tested on roads near you? Tell us in the comments...