FINAL REPORT: As police trial big cat as a patrol car, we bid our saloon a fond farewell 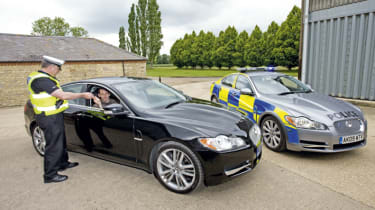 Don't get the wrong impression – I haven’t been caught speeding. In fact, the only thing that has been going too fast is our time with Jaguar’s executive saloon. After seven months behind the wheel we’ve had to hand back the keys – and our long-term XF will be sorely missed.

If the firm’s latest initiative works, the Jag is set to become an even more familiar sight – but seeing an XF in your rear view mirror could spell disaster. That’s because the brightly liveried model pictured above is being evaluated by police forces up and down the land as a potential patrol car. Yep, the firm responsible for arguably the most famous getaway vehicle in history – the classic MkII – could find its latest model being used to put criminals behind bars.

You might wonder why the police need an executive saloon that costs more than £36,000. But I can see the attraction – especially as the 2.7-litre diesel engine under the bonnet of our car has been replaced by a bigger 3.0-litre unit promising more punch. Adding to the appeal are decent fuel economy and best-in-class resale values – our car is now worth £29,000 in part-exchange. Plus, the XF’s low emissions are helping it muscle in on the BMW 5-Series as the pursuit vehicle of choice. Police fleet managers have a keen eye on the environment. We’d certainly give the big cat a ringing endorsement.

The classy, refined cabin and comfortable seats will ensure long hours on patrol pass with the minimum of fuss. Plus, the boot also has plenty of space for traffic cones, while any suspects unlucky enough to find themselves in the back will have lots of legroom!

The £1,116 Bowers & Wilkins audio system in our car is a costly option, but if you like your music it’s money well spent. We’d bypass the 20-inch alloys, though. While they look great, they are a pain to keep clean and ruin the Jaguar’s low-speed ride comfort.   The spring-loaded petrol filler cap sometimes refuses to open, too, and we’ve had to fix a scrape on the front bumper that mysteriously appeared during the car’s first week in our hands. The smart repair specialists at Shine! sorted this at a cost of £115.

Yet these are our only real complaints after 11,525 miles – and other owners are clearly just as impressed, as the XF came out on top in our Driver Power 2009 satisfaction survey in April (here). That means the XF now holds our two most prestigious awards – it’s also Auto Express’s reigning Car of the Year – so it’s no surprise the cops want a piece of the action!

When I was growing up, I was never one of those kids who wanted to be a policeman. But the chance to spend your days driving one of Jaguar’s finest should help attract the next generation of  recruits…

I’m going to miss our Jaguar nearly as much as Ross. Not many cars can match its blend of cosseting comfort and sharp driving dynamics, while its rakish good looks still turn heads even though it’s more than a year old. Inside, the big Brit has impressed everyone with its luxury, generous equipment and decent space. The only blot in the car’s copybook was the fuel consumption – I rarely managed to get the trip computer to read more than 34mpg.