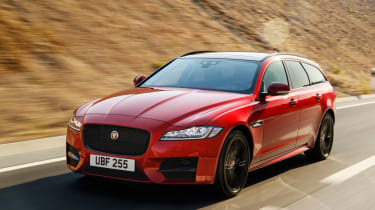 The new Jaguar XF Sportbrake is a good looking, practical, sweet driving estate car in all its guises, but the 2.0-litre petrol version is not the best engine option to go for. It lacks torque compared to the diesels and is nowhere near as economical in the real world as a result. Otherwise this is a fine, well priced, well specified new estate car from Jaguar.

The second generation Jaguar XF Sportbrake is without question a better car than the first, and we were already fans of the original.

In petrol 2.0 guise it costs £42,435 and has 247bhp and a 155mph top speed but as with any estate car, the most important consideration with the Sportbrake is the space it offers. and this “new improved” version is one of the roomiest in its class, boasting a 565-litre boot with the seats in place and 1,700 litres when the rear bench is folded flat.

The load area is completely flat as well, making the space available about as usable as it gets at this level. The numbers mean the XF Sportbrake matches arch rival the BMW 5 Series Touring for outright space, although the Mercedes E-Class is a touch bigger in its load area.

Up front you'll find the same well built (if slightly uninspiring) cockpit plus an ever so slightly out-dated infotainment screen that fails to match the best on offer in German rivals. The fact is, the XF – in Sportbrake or saloon guise – still trails its key rivals when it comes to tech functionality. There's no Apple CarPlay or Android Auto software for example. Those who rely on their smartphones in their cars might find it frustrating to interact with the XF. 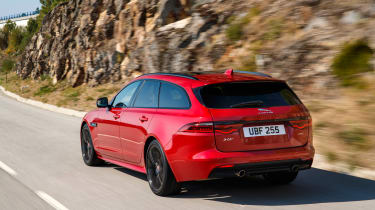 That aside, the quality inside the new Sportbrake is hard to fault, and the front seats in particular are excellent in both the support and comfort they offer. Plus the optional new (£1,125) panoramic roof also looks great.

Question is, though, has the transition from refined saloon to practical load-lugger harmed the latest XF’s fine driving dynamics? In a word, no, which is impressive given that the Sportbrake weighs over 100kg more than the saloon on which it’s based.

On the move, you’d be hard pressed to notice the difference in normal driving, although the harder you push, the more you can elect the extra weight at the back. Not that the Sportbrake – certainly in rear drive R Sport guise as tested – ever feels anything other than crisp on the move, with steering that is especially sharp for an estate car.

All Sportbrakes come with self-levelling air suspension at the rear, which offers fine body control but also a typically soothing Jaguar-like ride quality. The revised rear-drive chassis, in other words, is fundamentally excellent.

But as intimated the 2.0-litre petrol engine, while decently refined, isn’t as smooth or effortless as the diesel version we tried a few weeks back. The bare figures seem impressive enough, with a 0-60mph time of 6.7sec and theoretical 41.5mpg economy with emissions of 155g/km. But because you have to work the petrol engine that much harder to get at the torque, you need to rev it higher, which incites more noise from the not especially sweet sounding engine, and less real world economy. The throttle response is also only so-so, even with Sport mode selected in the otherwise fine eight-speed auto transmission.

The kit count, on the other hand, is genuinely impressive. All cars from the entry-level Prestige to the range-topping First Edition come with sat-nav, climate control and a powered tailgate, while top-spec models feature keyless entry and special ‘Windsor’ leather trim. The R-Sport version, as tested, probably offers the best spec compromise, with sportier, better seats, more aggressive bumpers and xenon lights, all as standard.